Getting back into nature doesn’t mean you must drive several hours outside of the city!. There are tons of options for hiking in Houston, with a diversity of microclimates and trails to enjoy.

Houston is located in what is considered southeast Texas and close enough to the Gulf of Mexico to provide plenty of rain for its surrounding forests and other vegetation.

Although a very industrial city, Houston has a large number of parks for hiking and adventure, either inside its beltway or within a couple of hours’ drive from the city center.

Let’s take a look at the best parks enjoying nature and hiking, both in and near Houston.

First, we will look at parks with fun trails and hikes in Houston, and then hiking trails outside of the city proper with a radius of about a two-hour drive. 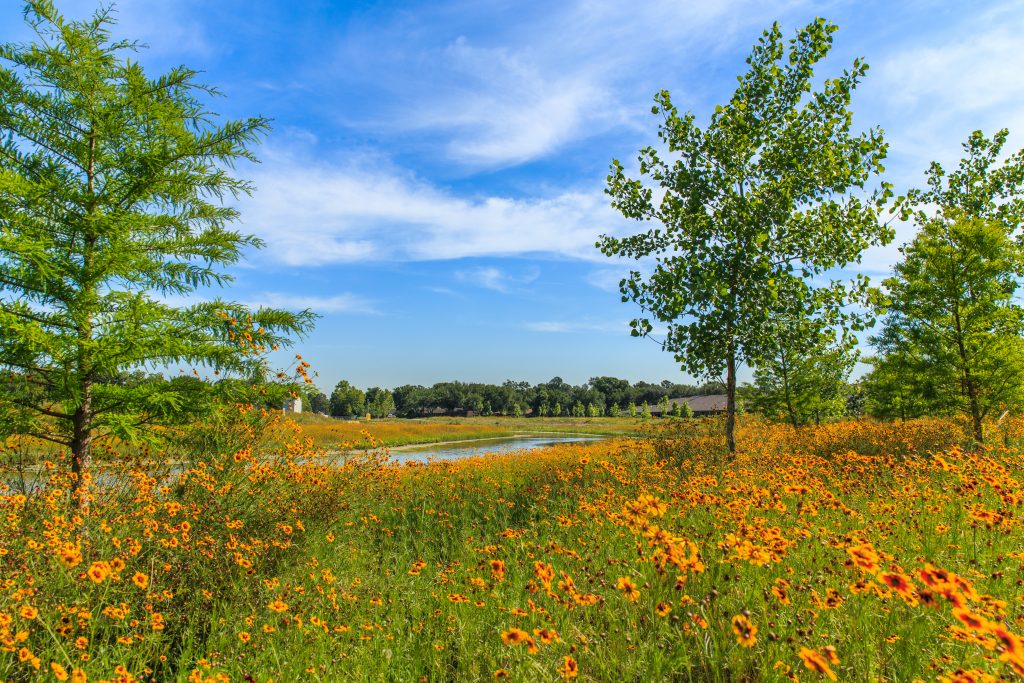 The Best Hiking in Houston

Any mention of hikes in Houston must include what many consider the best urban park around. At twice the size of New York’s Central Park, this Houston gem got its start as a World War I training camp.

Later named Memorial Park in memory of fallen soldiers of the Great War, it boasts over 10 miles of multi-use trails for people to enjoy.

What sets Memorial Park apart from some of the other inner-city parks in Houston is that it is made up of several different trail systems. With 1500 acres, there are at least thirteen different systems, each built with various flora and fauna in mind.

Whether a city dweller or not, a hike through Memorial Park is a worthwhile visit when looking for the best hiking in Houston.

Memorial Park is located 4.7 miles from the city center, just inside the 610 Loop and west of downtown. 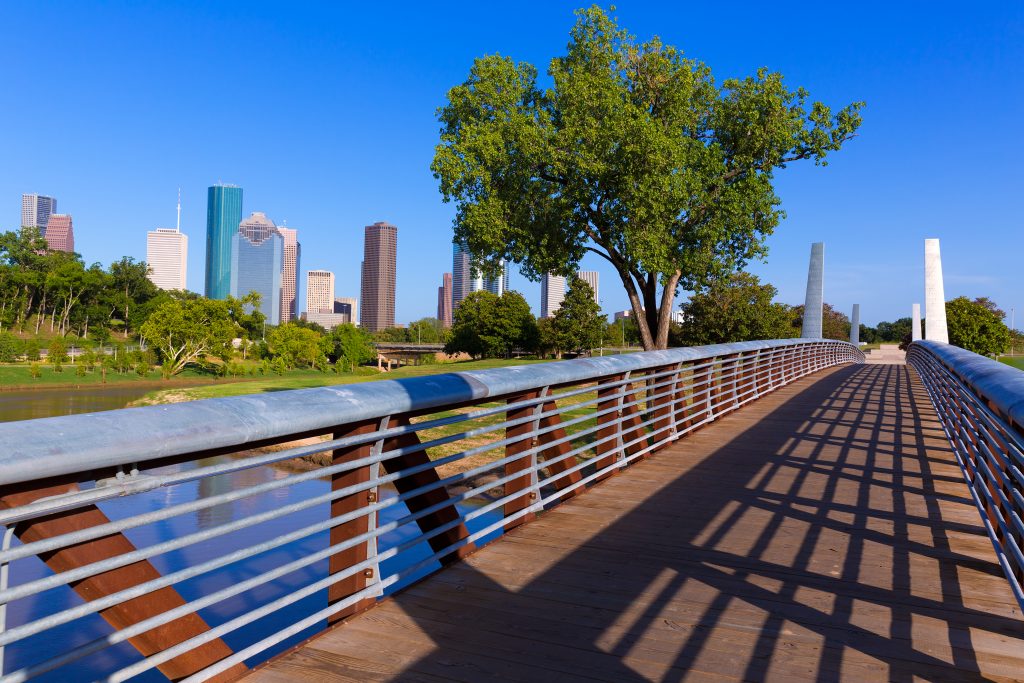 Self-described as one of the country’s best urban green spaces, Buffalo Bayou Park is composed of 160 acres of nature that are home to some of the best hikes in Houston.

This green space has a collection of trails that add up to around 15 miles total along Buffalo Bayou.

While still being developed by the city of Houston, there are plans to add new sections in the future to make it one of the longest urban trail systems in the country.

While hiking, take a side trip to see the historic water cistern system that was developed in 1926, and if walking at dusk, check out the thousands of Mexican free-tailed bats as they swirl out of the Waugh Street Bridge on their nightly hunt.

Buffalo Bayou Park is located within 1.5 miles of downtown. 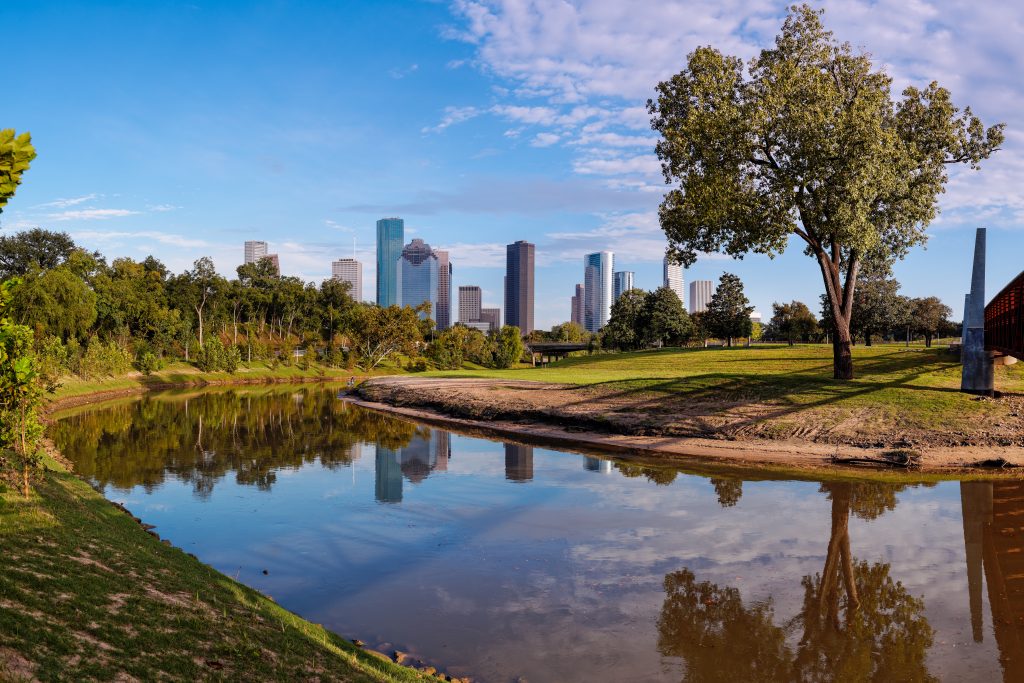 With over 10 miles of trails for hiking and biking, Terry Hershey Park is one of Houston’s best-rated parks.

Nature lovers will especially love the hiking Terry Hershey Park offers, as many of the trails run along Buffalo Bayou and are located in a wooded setting. The park’s natural diversity is a habitat for many of the Gulf Coast birds who call Houston home.

For those who love to ride mountain bikes, this park is locally famous as having some of the best bike trails in Houston.

READ NEXT
15 Instagrammable Places to Take Photos in Houston

The bike trails at Terry Hershey Park were designed by GHORBA or the Greater Houston Area Bike Association, who developed the trails with technical difficulties built in. The famous “Anthills” Trail for biking is located here at the park.

Terry Hershey Park is about 16.5 miles west of downtown, placing it right on the edge of considered an urban park. 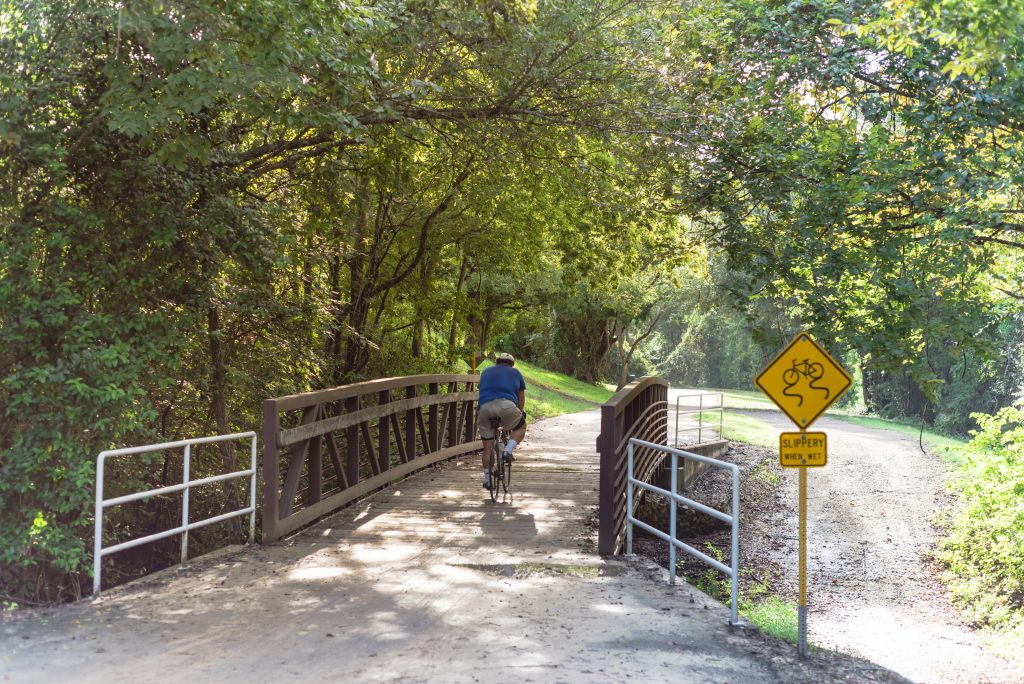 The White Oak Bayou Greenway has accomplished this by creating access to a system of hiking trails in Houston that run over 17 miles along the waterway the system is named after.

This may be the most diverse of all of the inner loop systems as it encompasses several different neighborhoods as it meanders west. 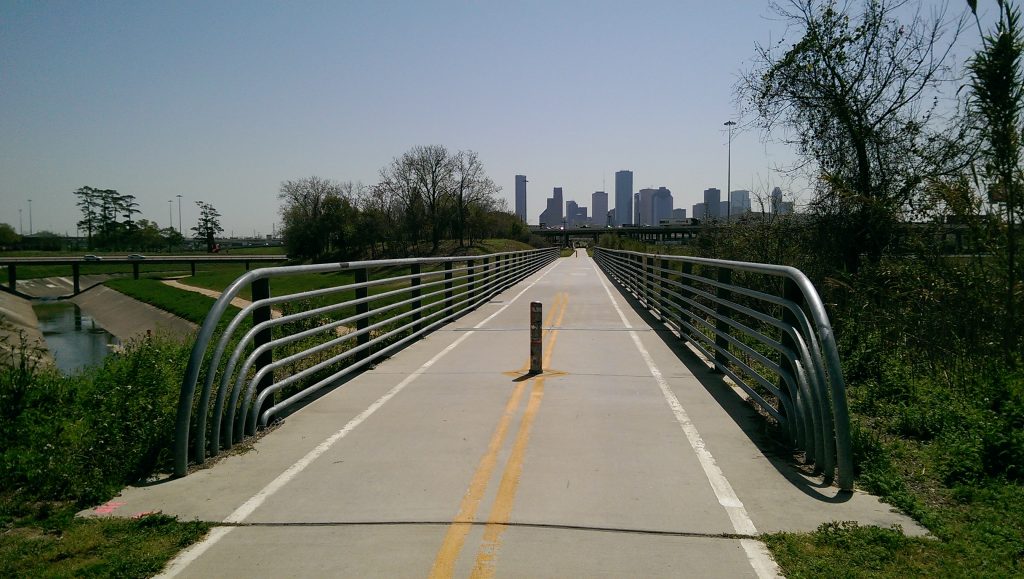 With 500 acres of mostly floodplain, Keith-Weiss Park is nestled within pine trees, of which 140 acres are dedicated to old-growth trees.

Although this has one of the shortest hiking trails of the parks inside the city at roughly 2 miles, the forested area makes it one of the most relaxing hikes in Houston.

Not only is Hermann Park known as the home of one of the best zoos in Texas, but it also owns some of the best urban hiking trails in Houston.

While not known for nature trails, walkers can enjoy scenery such as the Jessie H. Jones Reflection pool (the awesome obelisk is an extra treat), or the eight-acre McGovern Lake and other great points of interest along the way. The Cue de Grau of your walk will be Hermann Park’s Japanese Garden.

One of the best parts of hiking in Hermann Park is that when finished walking in the Texas heat, you can cool off in one of the many museums in the surrounding area. 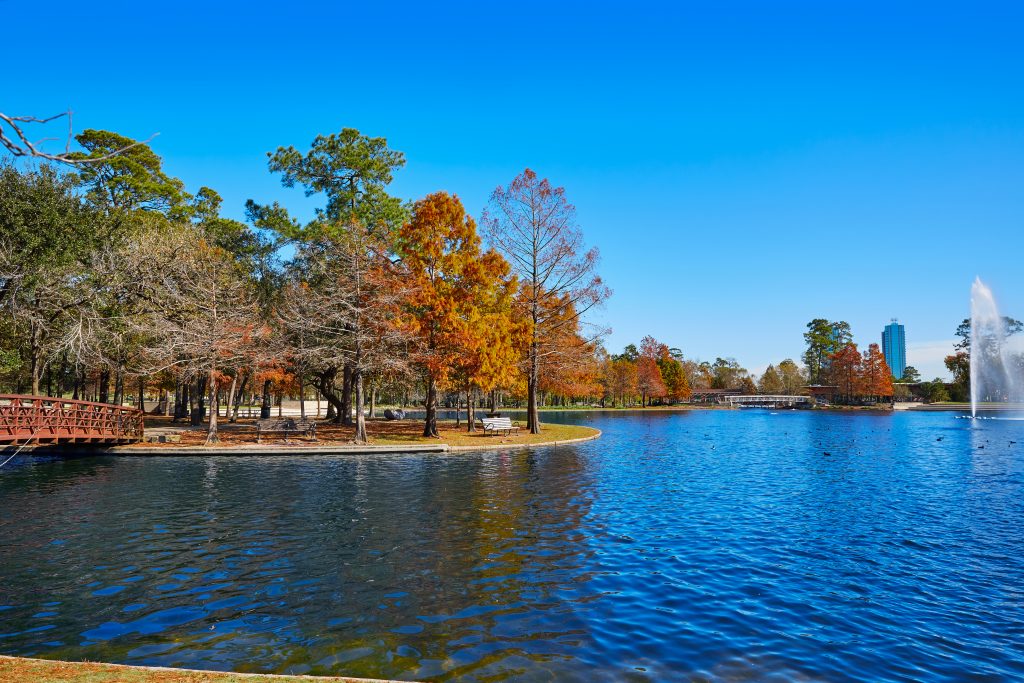 The Best Hiking Near Houston

This wilderness preserve of over 2500 acres in marsh wetlands is a Texas Gulf Coast treasure.

Armand Bayou Park is situated near the Trinity Bay and is filled with almost 400 species of animals and thousands of native plant life.

With five miles of trails, you are sure to spend a full day taking in the park’s beauty.

Armand Bayou Park is a 25-mile drive from the center of Houston.

While far enough out to be considered outside of the city, it is still considered urban hiking near Houston.

Although outside of Houston’s beltway and not in an urban area, Lake Houston Wilderness Park is part of the City of Houston’s park system.

Encompassing over 4700 acres, the park has over 20 miles of multi-use trails for hiking, biking, and horse riding.

With this many miles to cover, you may want to spend a couple of days hiking the different trails. Luckily, this is the only park in the city of Houston’s system that allows overnight camping. 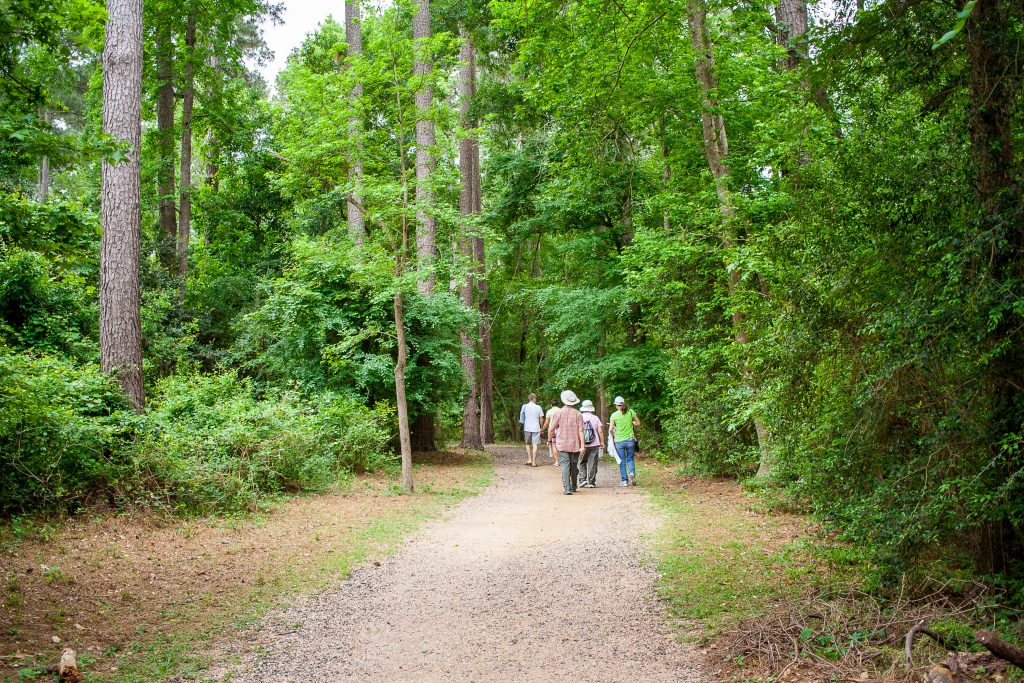 Texas has some of the cleanest and best-organized state parks systems of any in the country. The first state park on our list is a short drive outside the city and makes a great day trip.

Brazos Bend State Park has almost 40 miles of trails throughout the park, surrounded by nature. The paths of the park twist through hardwood forest and around lakes to satisfy the biggest outdoor enthusiasts.

READ NEXT
One Day in Houston: How to See Houston in a Day

For those who want to enjoy a great hike through the wilderness, but may not have the ability to walk, the park also offers 13 miles of horse trails (sorry, horses not included).

When you have completed this hike near Houston, visit the park’s nature center and observatory for a rest. 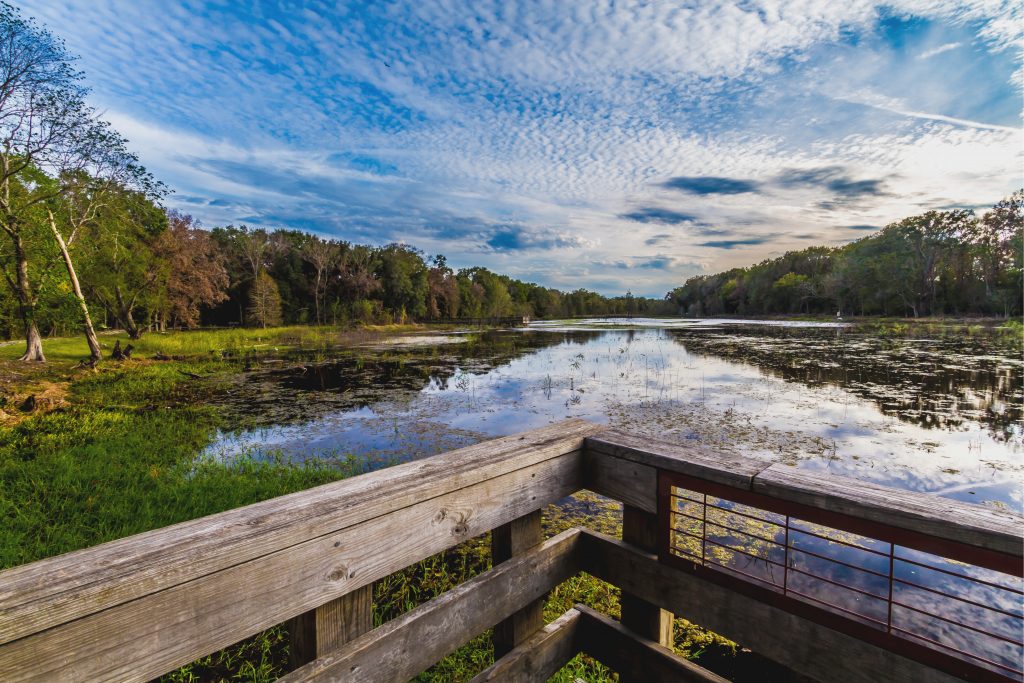 Close enough to Houston to be located in a developed area, Spring Creek Greenway is surrounded by enough nature to make you think you are in a faraway country setting.

There are currently 12 miles of trails running from park to park with a plan to add up to 30 miles when completed.

One of the best things about Spring Creek Greenway is that you can enter the trail system at several different points. Spring Creek Bend, Riley Fuzzel Road Preserve, Dennis Johnson Park, and Jesse H. Jones Nature Center are only a few parks to start your hike in the greenway.

Depending on which trailhead you begin your hike, Spring Creek Greenway is about 32 miles north of downtown Houston. 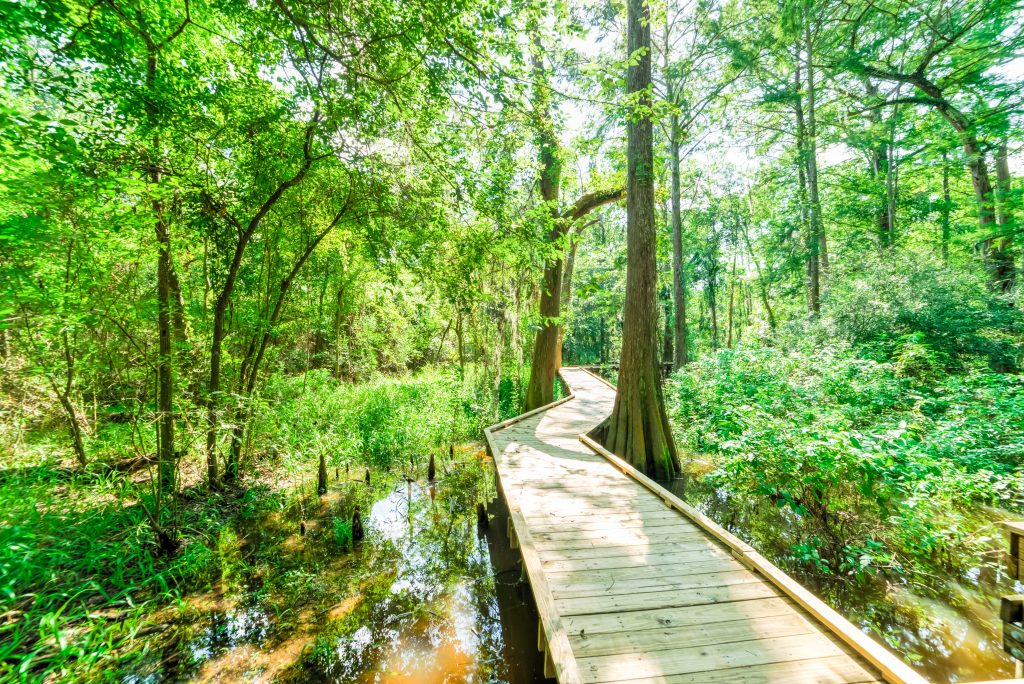 Getting back to state parks, we find one of the best areas for hiking near Houston.

Huntsville State Park is close enough to the city for a short drive, but far enough away to witness the topography of the land change.

Here you will find more challenging hiking trails, with rolling hills and plenty of wandering to do inside a thick pine forest. There are 18 miles of trails at the park, all connecting and between .08 miles up to around 13 miles each.

Much of the trail surrounds the park’s beautiful human-made lake, built by the Civilian Conservation Corps during the Great Depression years. Campsite, kayak, and canoe rentals are also available for extra fun. 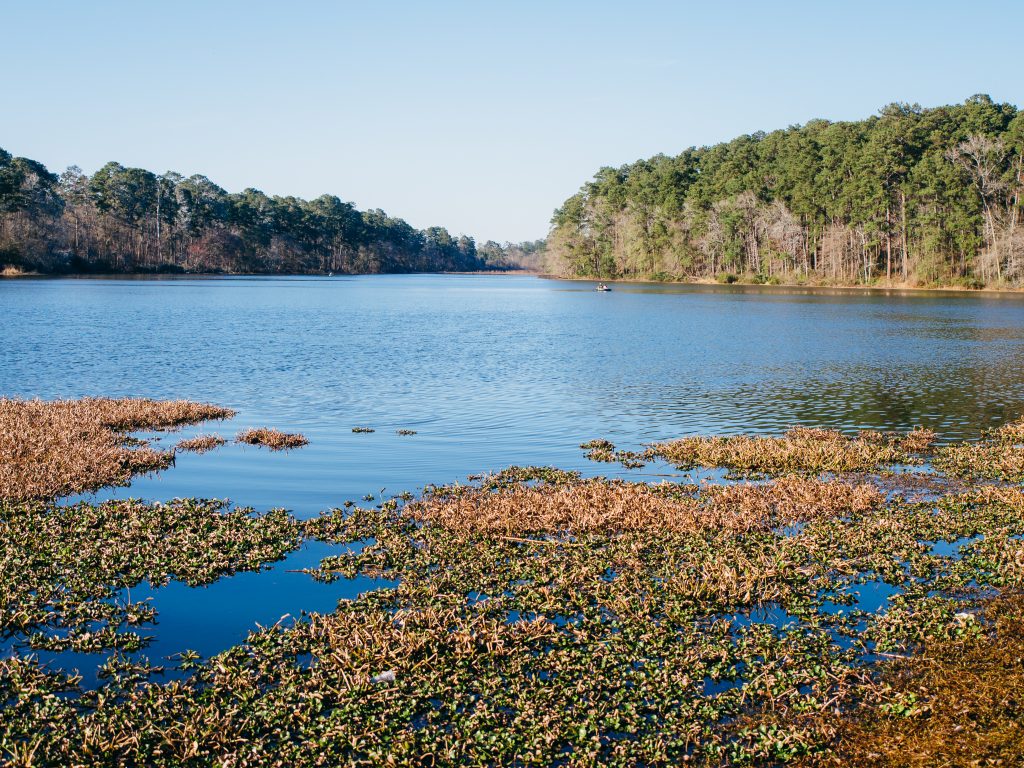 This massive national park covers over 163,000 acres and needs three Texas counties to stretch out in.

With over 128 miles of natural paths, this is by far the largest trail system on our list. One of the best places to mountain bike is the 18 miles of trails located in the Double Lake area of the Sam Houston National Forest.

Take a day hike starting at one of the dozens of trailheads or take several days to hike the entire system. Deep inside of the piney wood forest, you can spend an entire day without seeing another human in some of the more remote areas.

READ NEXT
15 Epic Hikes in Texas (+ Map to Find the Trails!)

Take plenty of water and food with you, as the Texas heat and distance between civilization can be extreme.

The Sam Houston National Forest has several trailheads in different towns and counties, but on average is a 60-mile drive from downtown Houston. 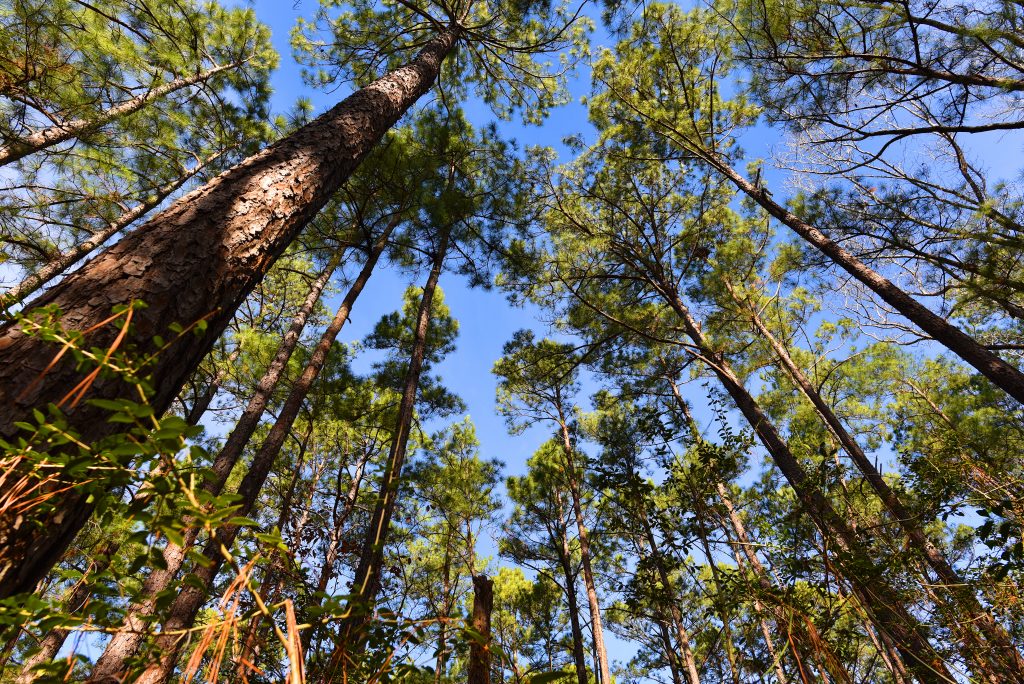 Compared to other state and national areas, Galveston State Park hiking trails are considered short in length. What they lack in extra miles, they make up for in diversity.

The park has four miles of hiking trails through beautiful and natural marsh and sand dunes that can’t be found on some of the longer trails in the area.

The trail system is well managed with wooden boardwalks designed to keep your feet dry.

When you need a cool off from your hike, take a dip at the park’s beach. 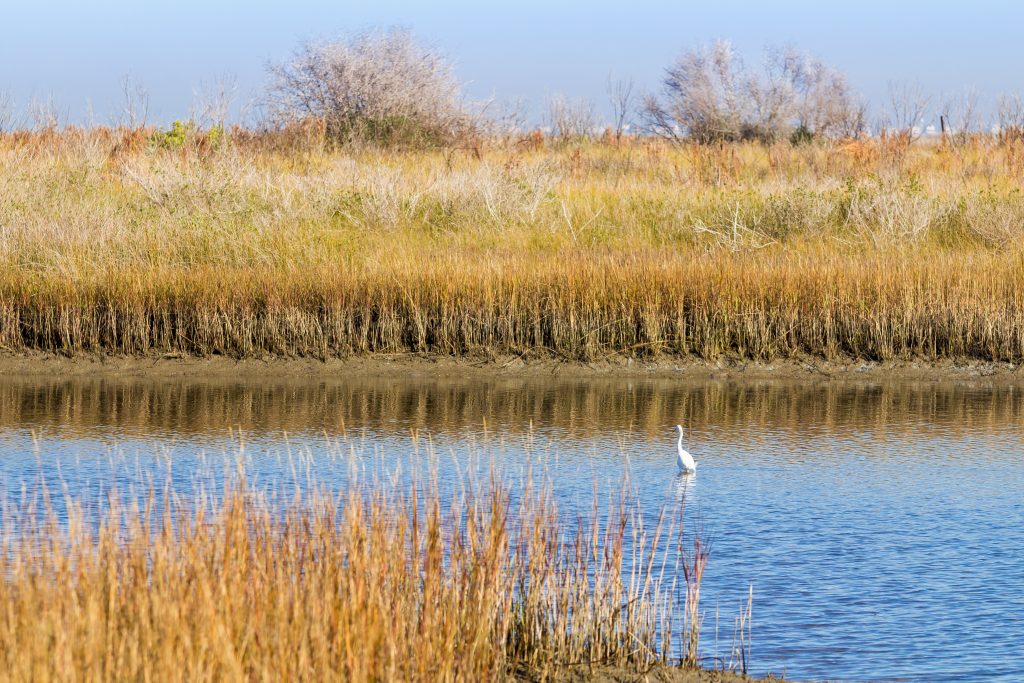 The best words to describe this trail system are long and varied, as nine different ecosystems can be found in the Big Thicket National Preserve.

As the name implies, the area is home to a dense forest that grows exceedingly fast in its subtropical climate.

Over 40 miles of hiking trails are maintained in the thicket, with access to hundreds of varieties of plant and animal species.

Located along several creeks and the Neches River, the park also offers camping, kayaking, and canoeing if you get tired of the long hikes. 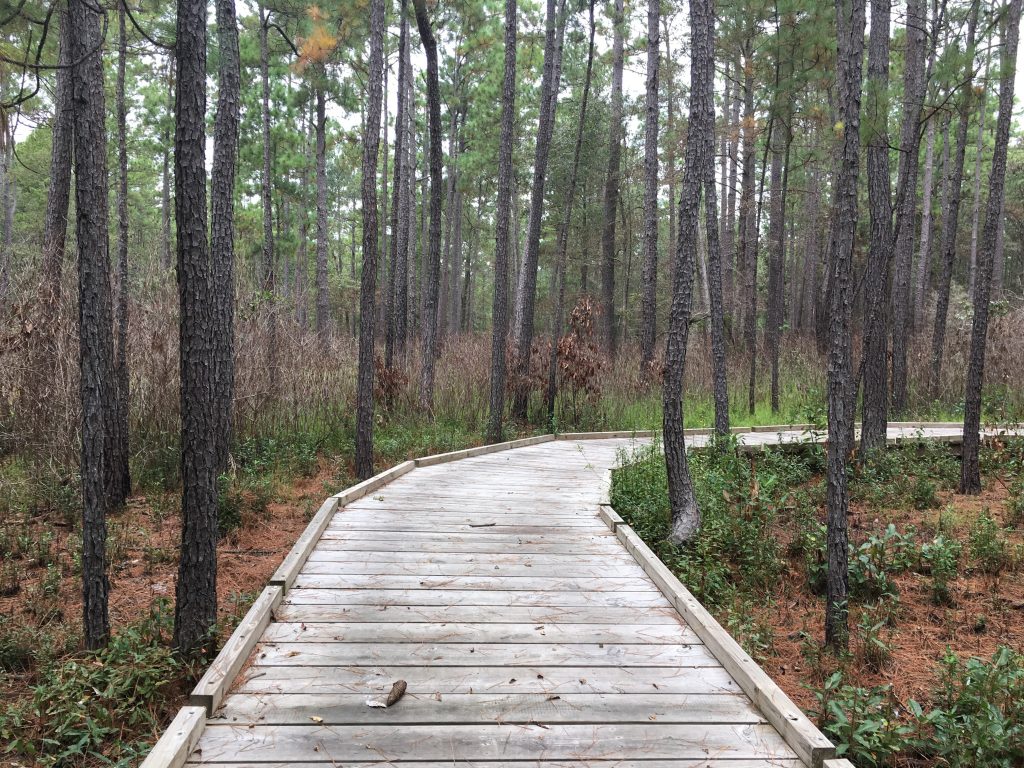 Located on the gorgeous Brazos River, this park offers 5 miles of hiking trail along the river and through native hardwood trees.

Not only is the park great for hiking near Houston, but it is also the site of one of the first colonies in Texas settled by Stephen F. Austin’s original three hundred families. 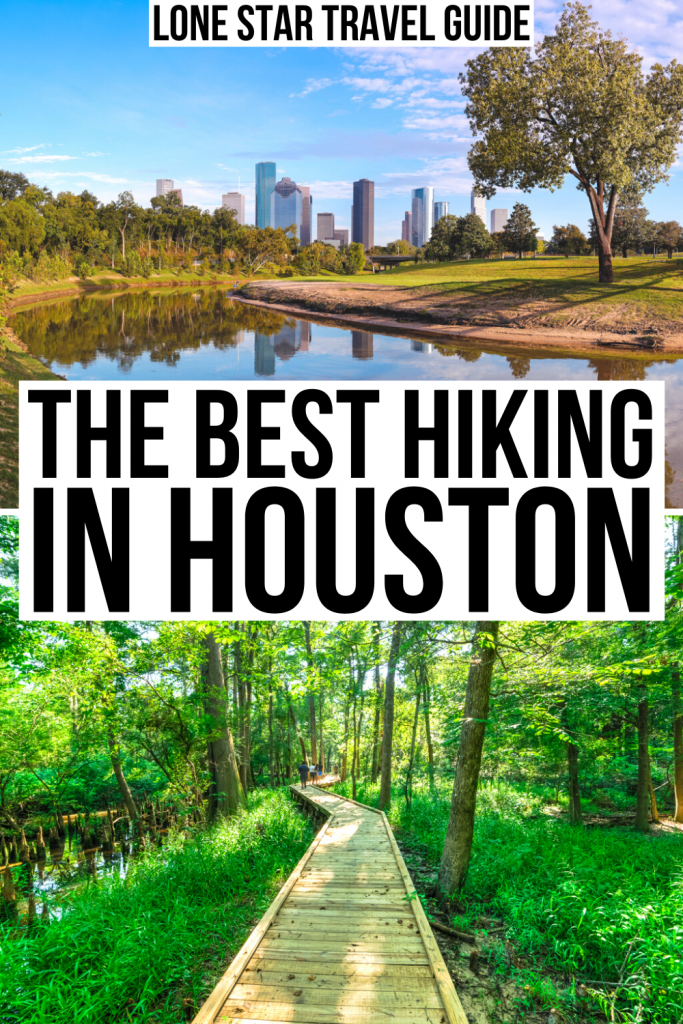