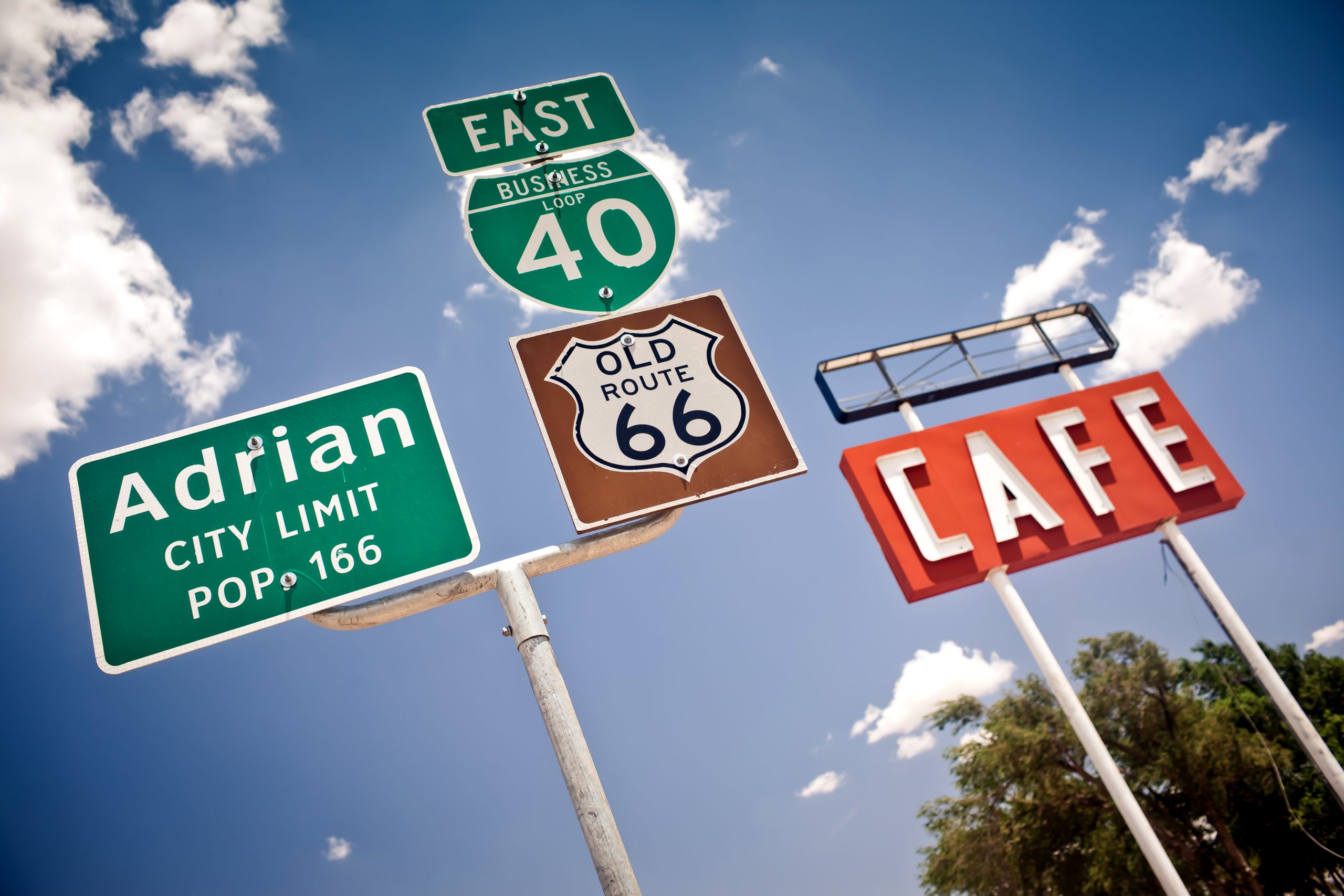 The Mother Road. The Main Street of America. The Will Rogers Highway. There are a lot of names for the USA’s most famous road trip, and when it comes to quirky roadside attractions, a small-town Americana feel, vintage charm, and a wide variety of things to do, you still can’t beat it. Luckily, there is a short-but-sweet stretch of Route 66 in Texas!

Want to drive the Lone Star State’s section of the Main Street of America? From what to see to where to stop to why you should bother gassing up the car and going in the first place, here’s everything you need to know about driving Texas’ Route 66.

While Route 66 is one of the best-known road trips in the USA, the story of how and why it came to be is less famous these days. Here are the basics.

Route 66 was originally commissioned in 1926 as one of the first US highway systems. It ran from Chicago, Illinois to Los Angeles, California, passing through the states of Illinois, Missouri, Kansas, Oklahoma, Texas, New Mexico, and Arizona before reaching California.

During the Dust Bowl of the 1930s, Route 66 was used by thousands of travelers fleeing southwest in hopes of a better life, and its popularity meant an economic boom for the small towns and cities that it passed through.

Over the decades, Route 66 was superseded by the US interstate system and was eventually entirely decommissioned in 1985 (today, in Texas, I-40 serves the same role that Route 66 once did). 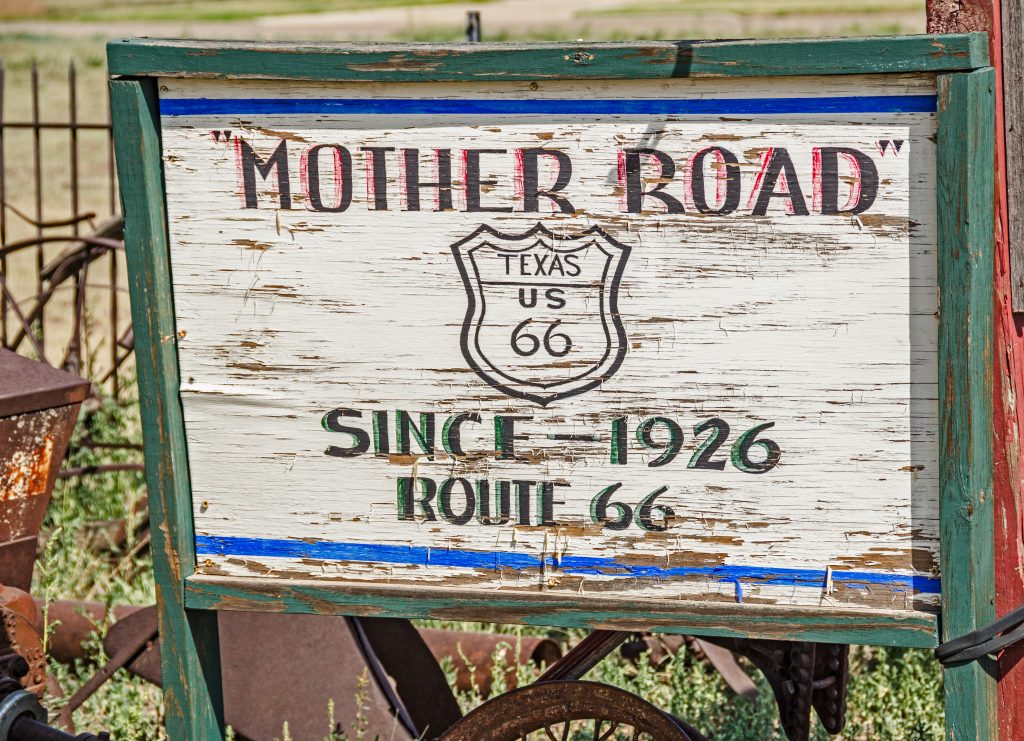 Sadly, this meant the literal death of Route 66–you can’t drive on most of the original road in Texas today, and some of it no longer exists at all–and also a figurative one, as the communities boosted by the traffic brought by Route 66 felt a deep economic impact as its influence faded.

The nostalgia for Route 66 is buried deep in American culture, though, featuring everywhere from John Steinbeck’s novel The Grapes of Wrath to the famous song from the Nat King Cole trio, “(Get Your Kicks On) Route 66”.

Combine that with the fact that many of the same Route 66 attractions of decades past still stand today–admittedly often abandoned or disheveled– and it’s no surprise that the road trip has seen something of a renaissance in recent decades.

While today’s Route 66 travelers tend to be looking for abandoned Art Deco buildings and quirky roadside attractions rather than a new life, the spirit of adventure and Americana lives on along Route 66’s modern incarnations, including in Texas. 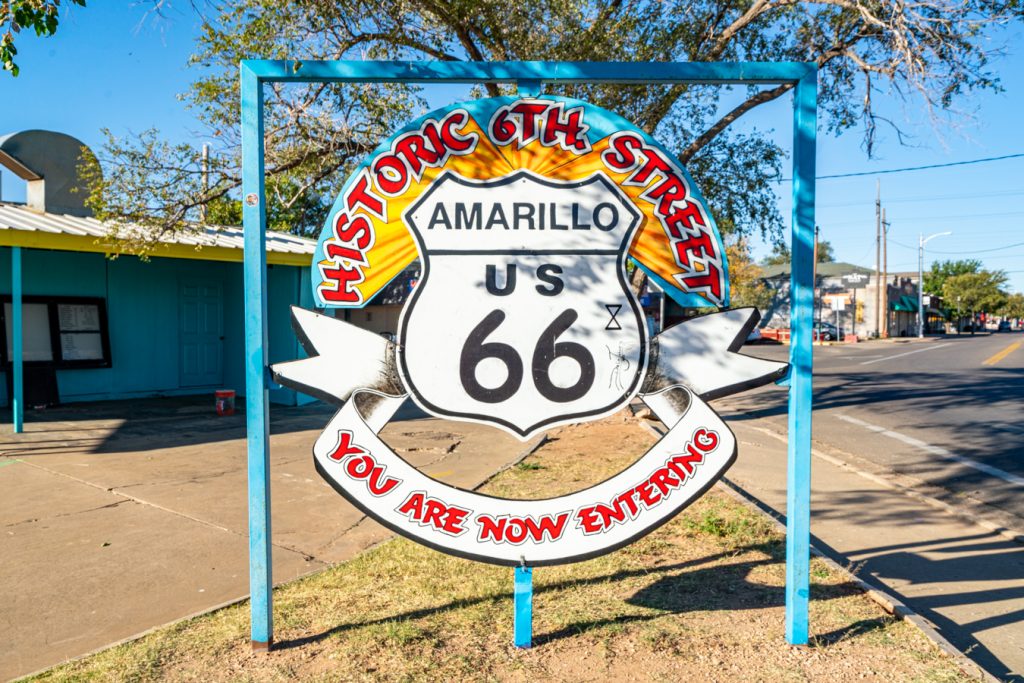 Where is Route 66 in Texas?

Despite being, geographically speaking, the largest state along Route 66, Texas is home to the shortest stretch of The Mother Road, coming in at 179 miles (a bit more once you add on detours, of course).

The road cuts almost straight across the Texas Panhandle, and today, I-40 serves most traffic passing through the area. 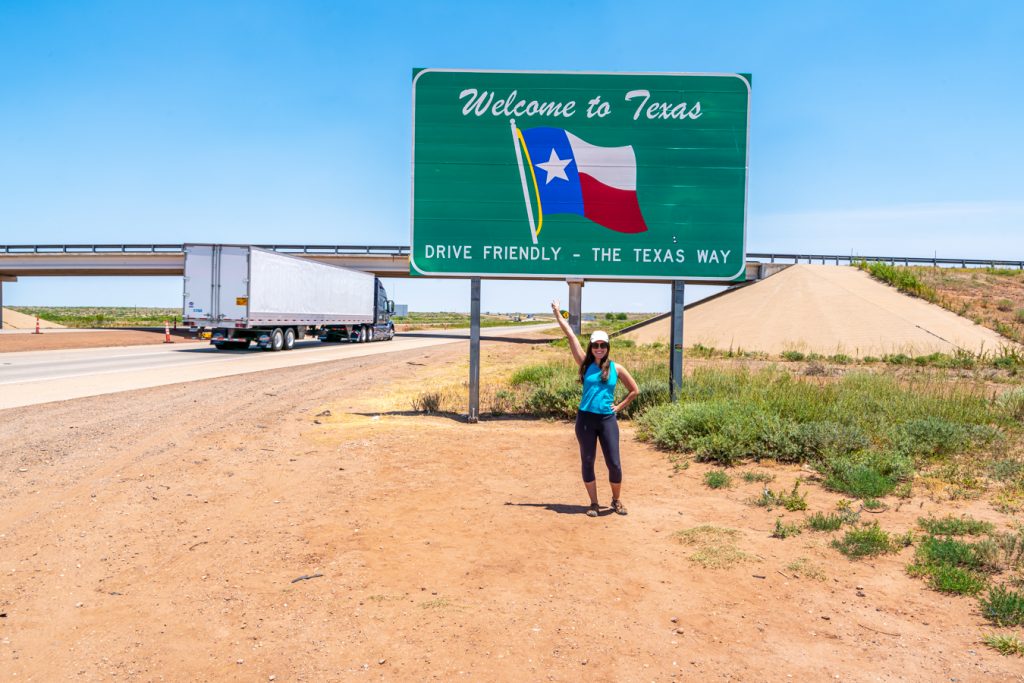 We’ve included both attractions located literally on historic Route 66 here, as well as some nearby things to do that aren’t to be missed on a Texas Route 66 road trip!

READ NEXT
25 Amazing Things to Do in Amarillo

One of the only portions of the original Route 66 still able to be driven in Texas, Amarillo’s Route 66 Historic District is lined with shops, restaurants, cafes, street art, and even a classic car or two. 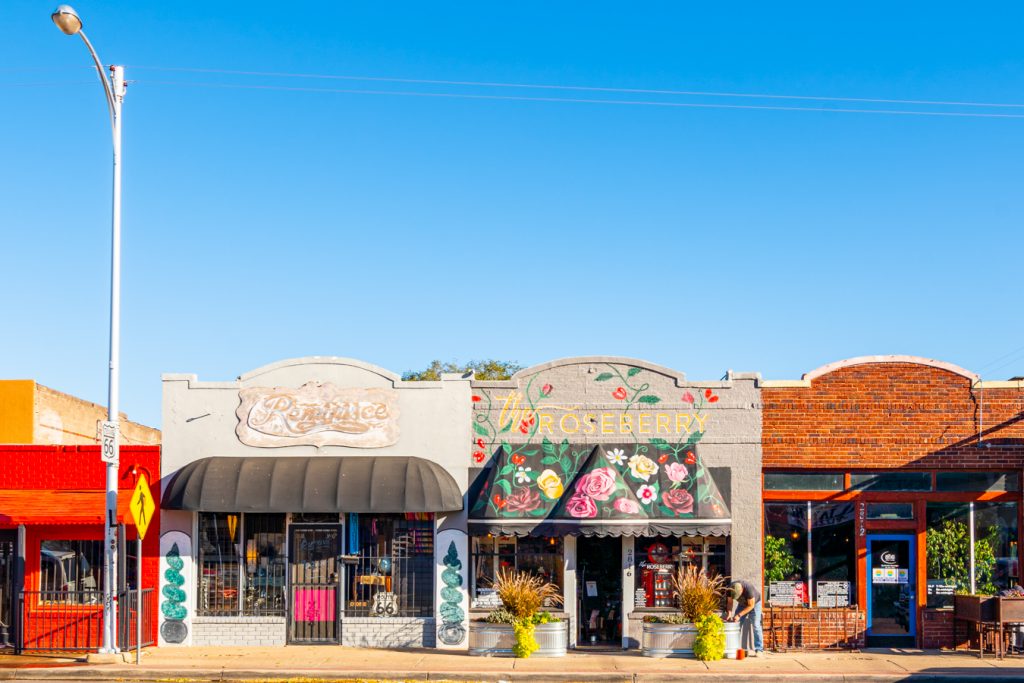 Arguably the most famous Route 66 attraction in Texas, Cadillac Ranch is home to ten Cadillacs that are lined up neatly in a row with their frontends buried in the desert and every inch of visible surface covered in thousands of layers of spray paint.

It is quite a sight, and definitely worth a visit!

Look closely at this mesa outside of Amarillo, and it may just appear to be floating. That’s not natural–it’s the result of a white stripe painted around the top of the mesa–but it is quite the sight!

Unfortunately, the mesa is far from the road and you can’t approach it, so if you want to photograph this phenomenon when driving Route 66, bring a zoom lens with you.

READ NEXT
How to Visit Route 66’s Cadillac Ranch in Amarillo, TX

The Midpoint Cafe in Adrian

The Midpoint Cafe has had many names, owners, and iterations since it first opened in 1928, but today, it remains proudly in the center of historic Route 66, with a slogan that reads “when you’re here, you’re halfway there.”

In addition to tasty pies and other foods, the Midpoint Cafe of today also serves as a gift shop. 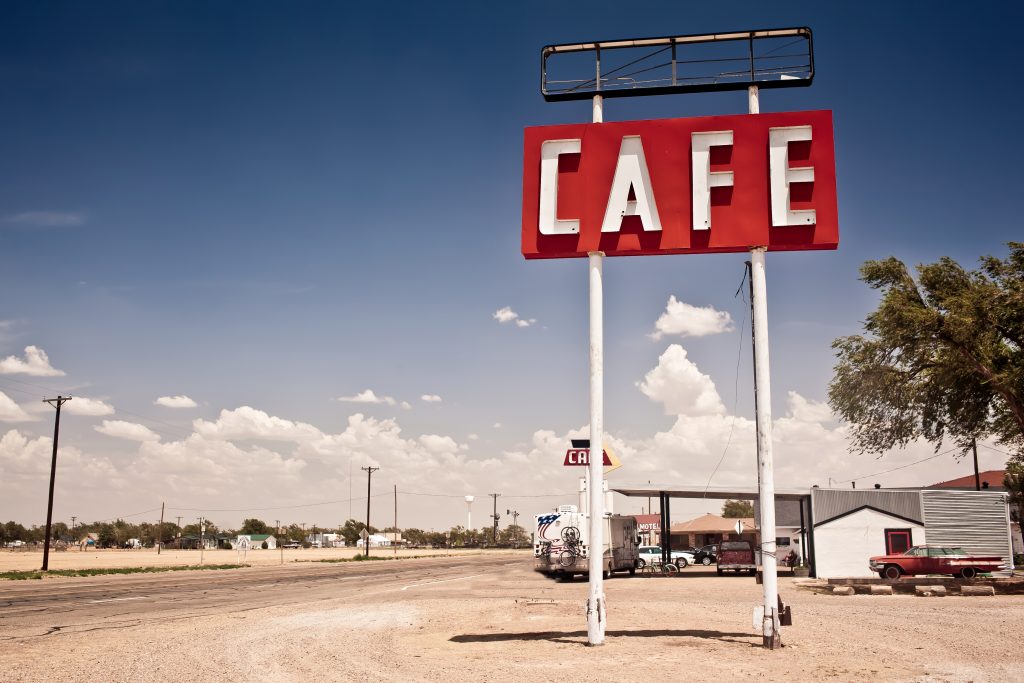 Dating to 2002, the VW Slug Bug Ranch is exactly what it sounds like: an ode to the more-famous Cadillac Ranch, but done with five VW Slug Bugs.

Think you have a big appetite?

If so, consider hitting up the Big Texan Steak Ranch for their 72 oz. steak challenge, one of the most infamous things to do in Amarillo!

If you take the challenge, you’ll need to sit on a small stage-like table at the front of the restaurant as you (try to) eat a 72 oz. steak, plus fixings, in less than an hour. If you succeed, the meal is free. If not, prepare to cough up $72.

Even if food challenges aren’t your thing, though, this utterly unmistakable and over-the-top restaurant/roadside attraction combination is well worth a stop as one of the most famous roadside attractions on Route 66 in Texas. 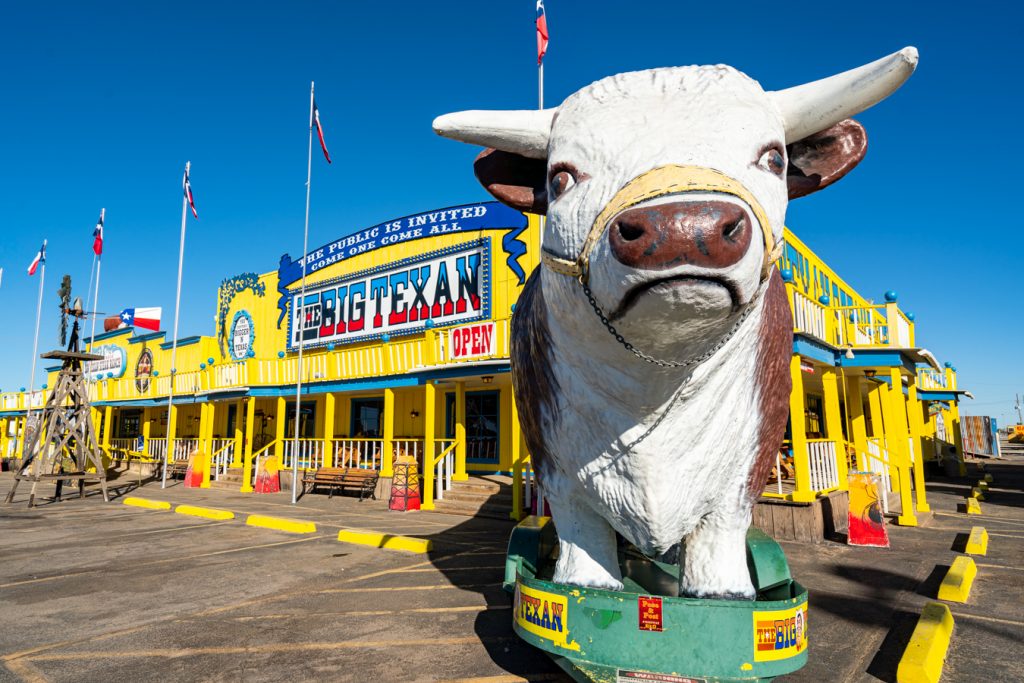 The farmer’s answer to Cadillac Ranch, these buried tractors can’t be approached–but they are quite the roadside attraction.

The second-largest canyon in the USA, nicknamed the Grand Canyon of Texas, is located just 30 minutes off of Route 66 and is definitely worth a detour.

There are plenty of viewpoints and trails to choose from, but the hike to the Lighthouse formation is the most popular for a reason–the views are simply incredible. 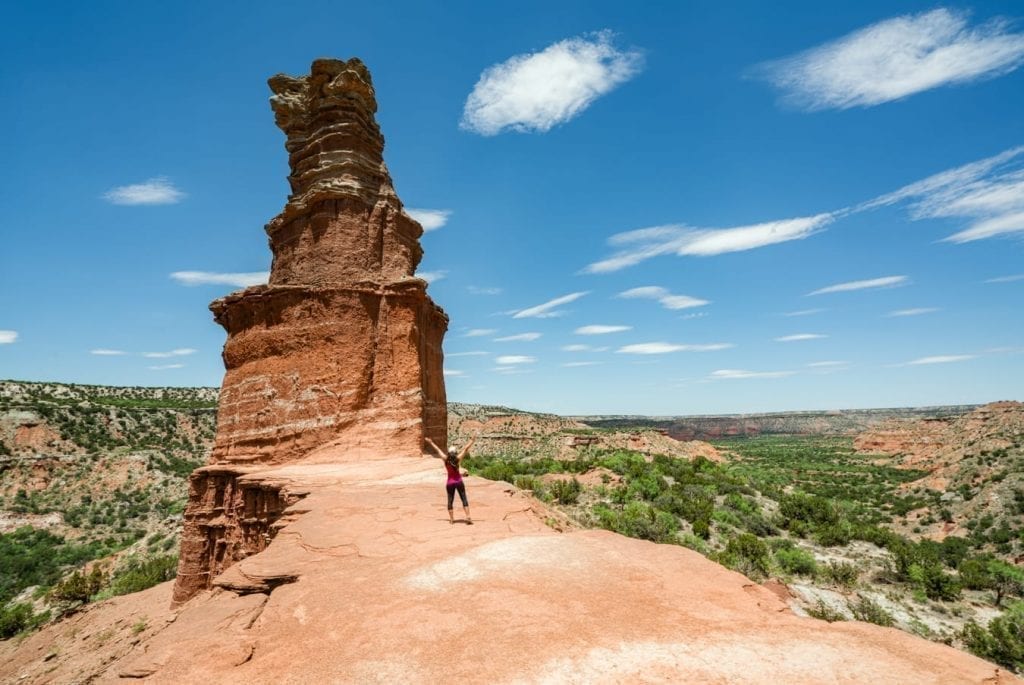 Most famously, the Conoco Tower Station and U-Drop Inn Cafe are among the best Route 66 attractions in Texas.

Ozymandias on the Plains

Named for a 19th-century Percy Shelley poem that references an Egyptian King, Ozymandias on the Plains may look like a damaged statue, but it was built to look exactly as it does. 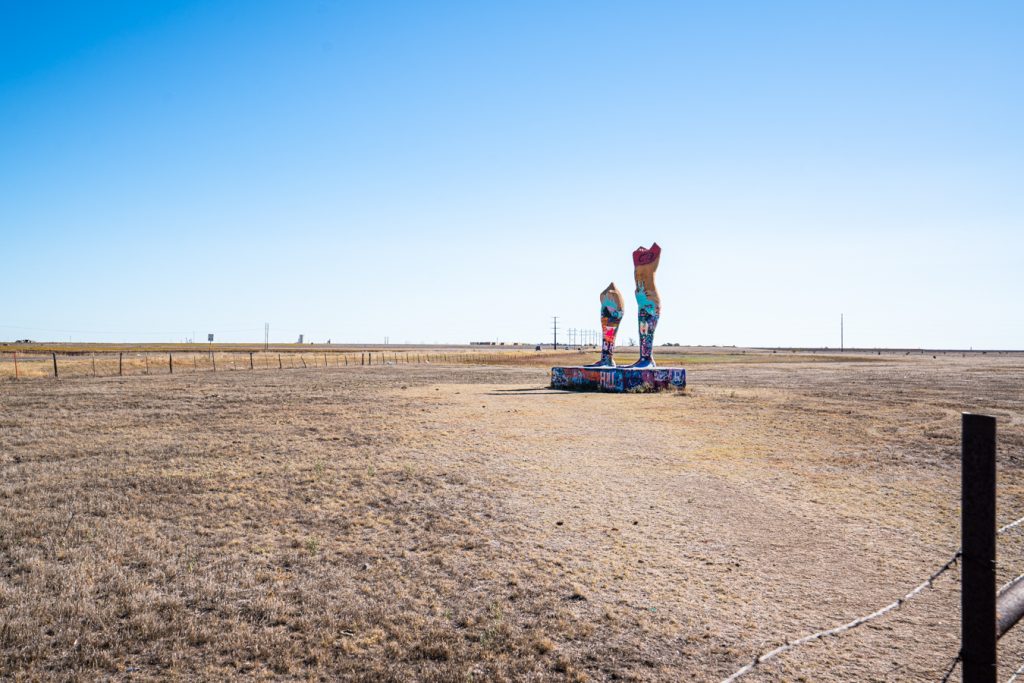 Interesting Towns & Cities to See on Route 66 in Texas

Technically the only city along Route 66 in the Lone Star State, Amarillo is home to many of the best Texas Route 66 roadside attractions, as well as one of the only preserved sections of the original Route 66. 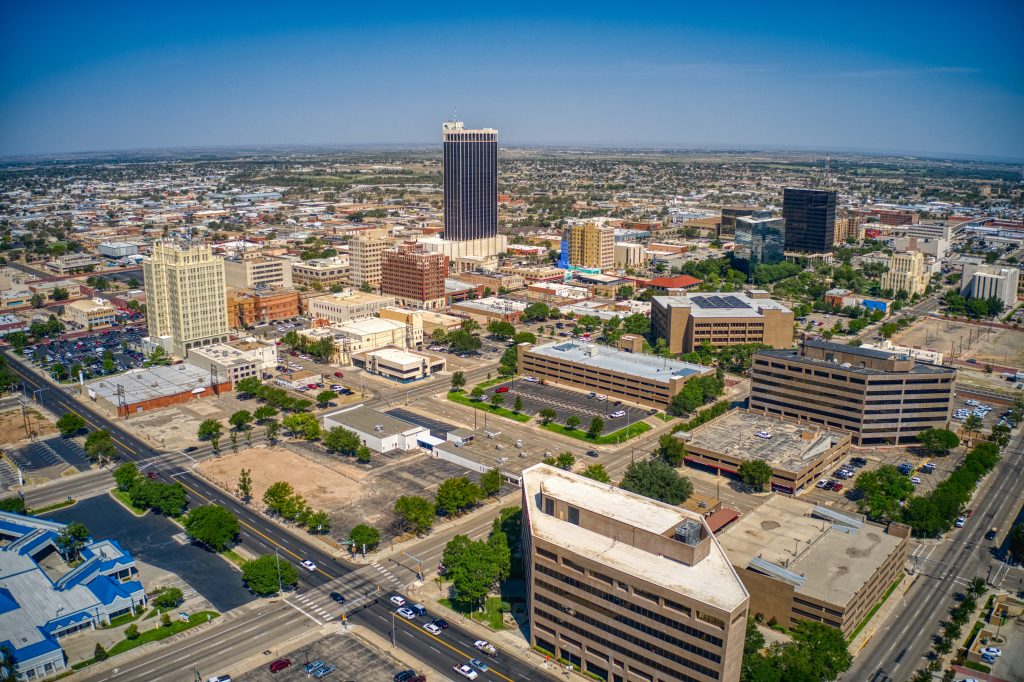 Shamrock is known for its classic Art Deco architecture, especially the U-Drop Inn Cafe and Conoco Tower Station, and is an unmissable stop on Texas’ Route 66.

One of the most famous towns along the portion of Route 66 in Texas, Adrian is known for being the midway point along the historic route–1139 miles from Chicago, and 1139 miles from Los Angeles.

Be sure to stop at the iconic Midpoint Cafe when you visit! 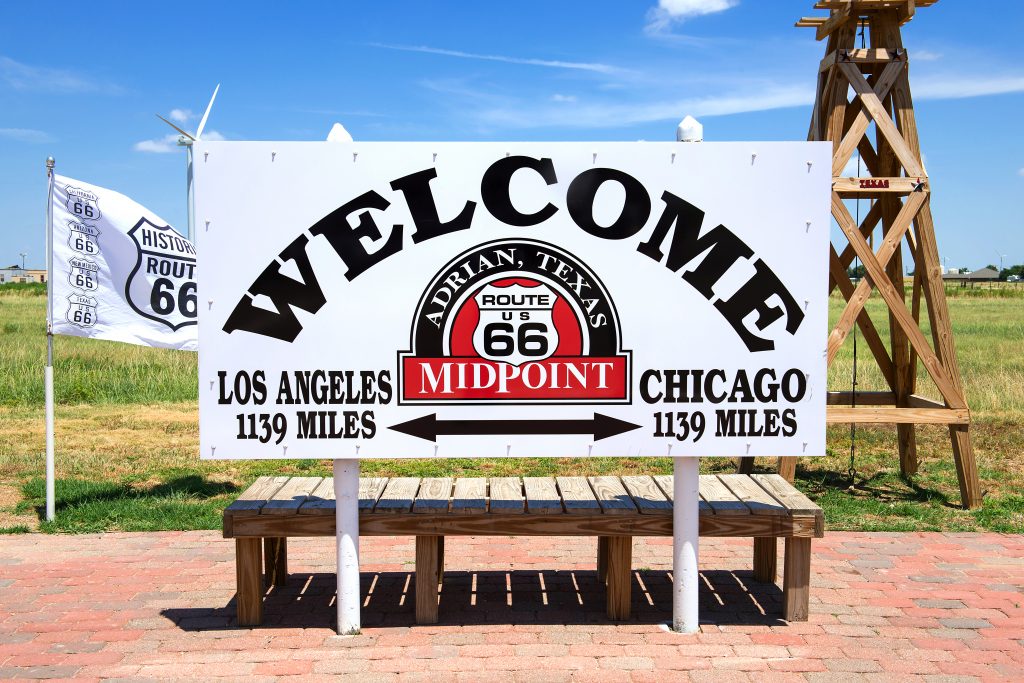 Once a thriving town on Route 66, boosted not only by Route 66 visitors but by ranching and the oil boom, McLean’s entire Commercial District is listed on the National Register of Historic Places and is a must-see when driving the route through Texas.

Unlike the rest of the towns mentioned on this Texas Route 66 guide, Glenrio–located in both Texas and New Mexico–is a literal ghost town, with nothing left of its Route 66 legacy except abandoned buildings, including the Little Juarez Cafe. 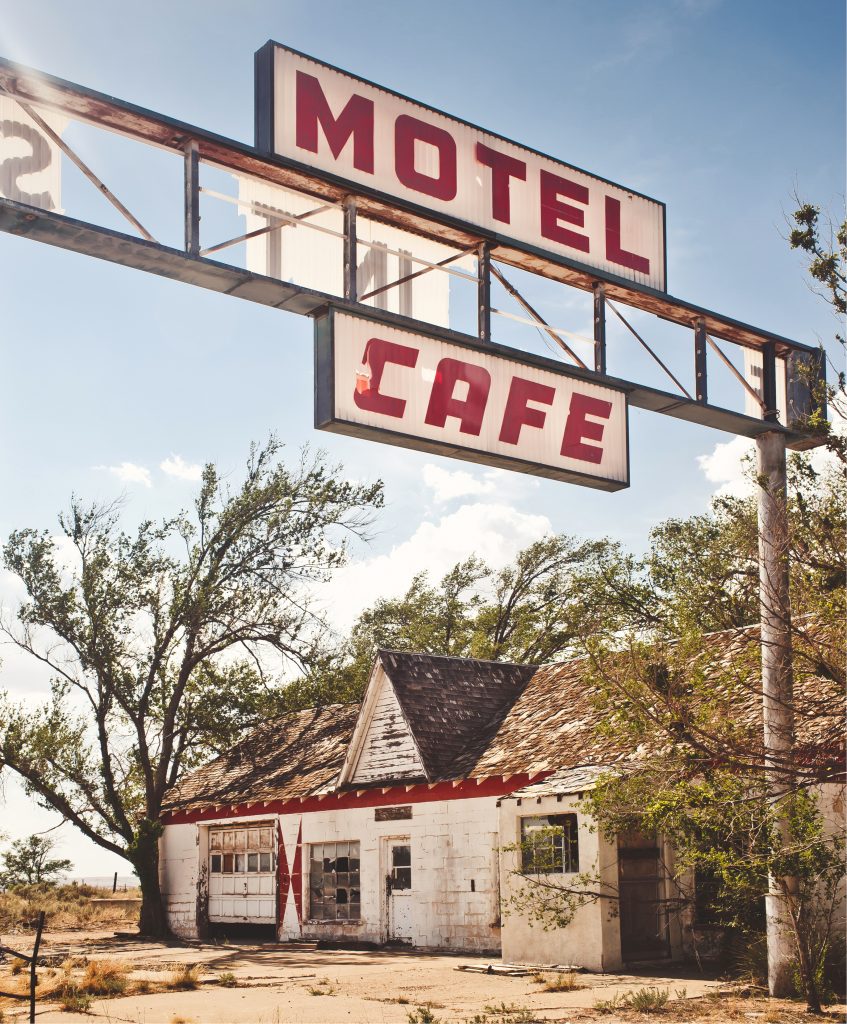 Located on the Oklahoma/Texas border (fun fact: the border moved around so many times that at one point, residents had lived in both Texas and Oklahoma without actually going anywhere), Texola is home to the old Magnolia Service Station, a classic Route 66 roadside stop.

Featuring a second Magnolia Service Station along this part of Route 66, the tiny town of Vega’s classic gas station has been fully restored to look as it would have in the 1920s heyday of Route 66. 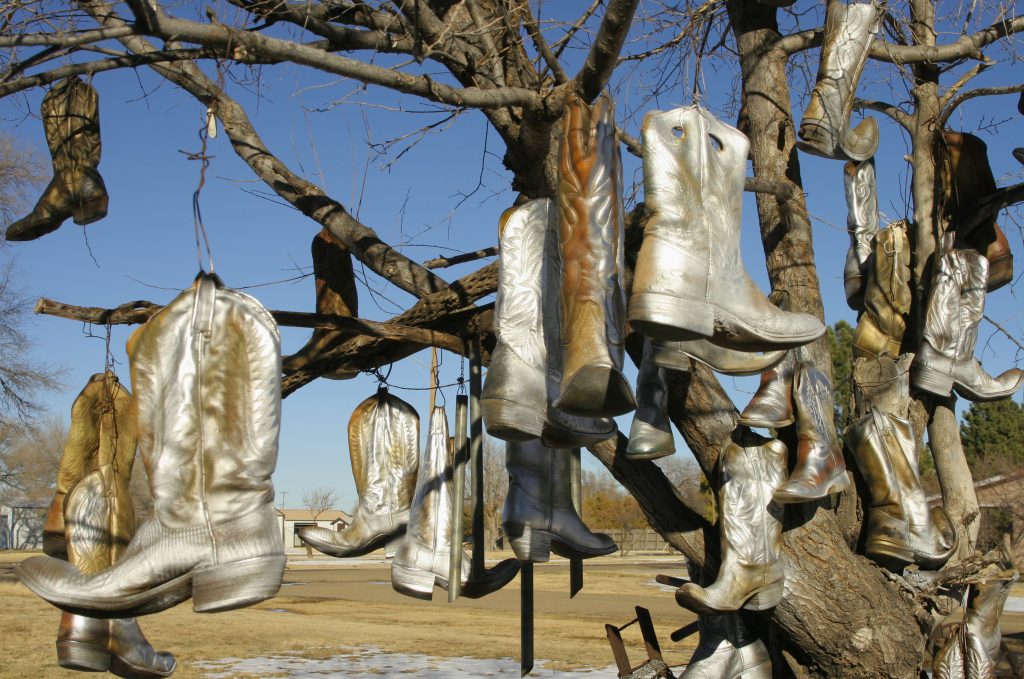 FAQ About Driving Route 66 in Texas

Can you still drive Route 66 in Texas?

Since the highway was decommissioned in 1985, most of it is no longer in use–but the quirky, Americana spirit of Route 66 absolutely lives on along I-40, and is worth seeing for travelers interested in Route 66. 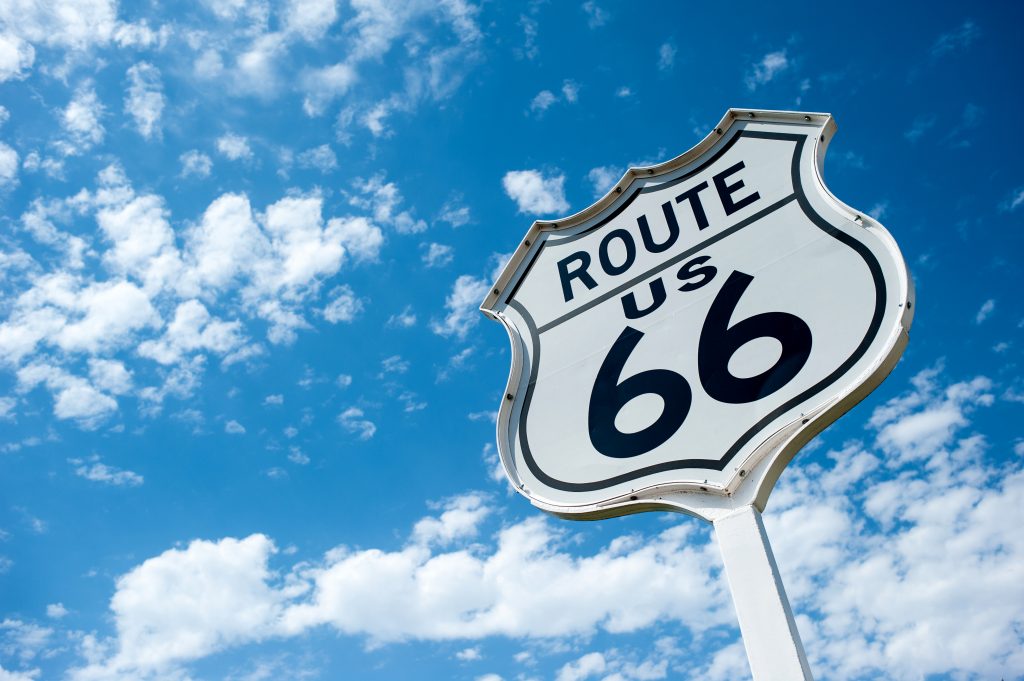 How long does it take to drive Texas’ portion of Route 66?

From Texola on the eastern border of Texas to Glenrio on the western border, the modern version of Route 66 in Texas takes under 3 hours to drive straight through.

However, to best experience the route, we recommend spending at least one night along Route 66 in Texas (Amarillo is the obvious choice for where to stay, and we recommend it).

Is driving Route 66 in Texas worth it?

Do you like quirky roadside attractions, unexpected museums, almost-forgotten cafes, and endless stretches of wide-open spaces?

If so, you’ll probably love driving Route 66 in Texas. 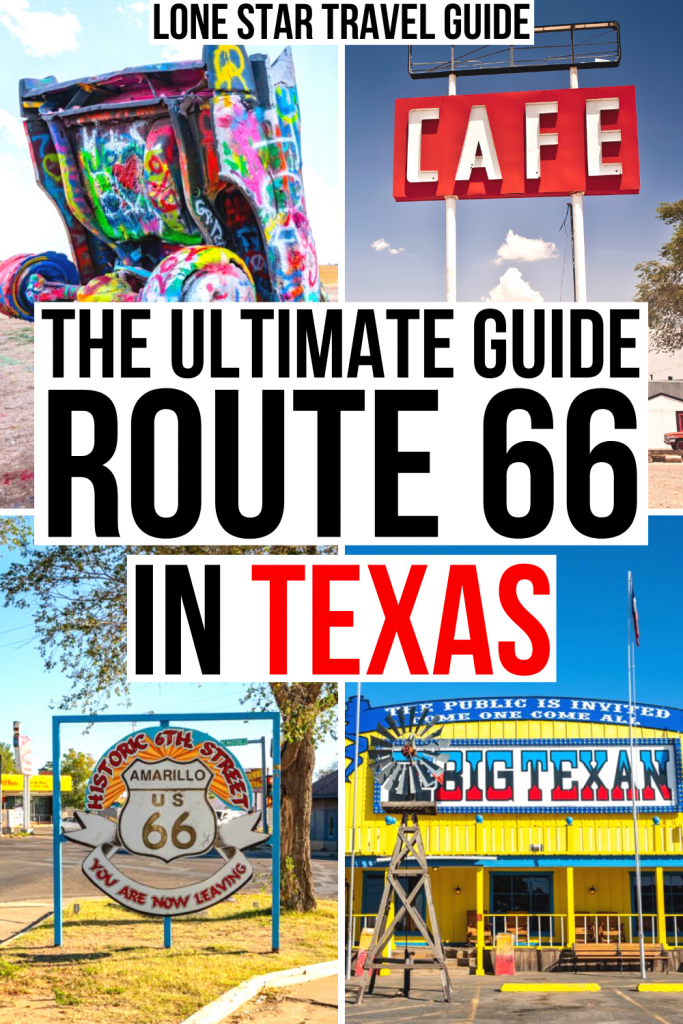