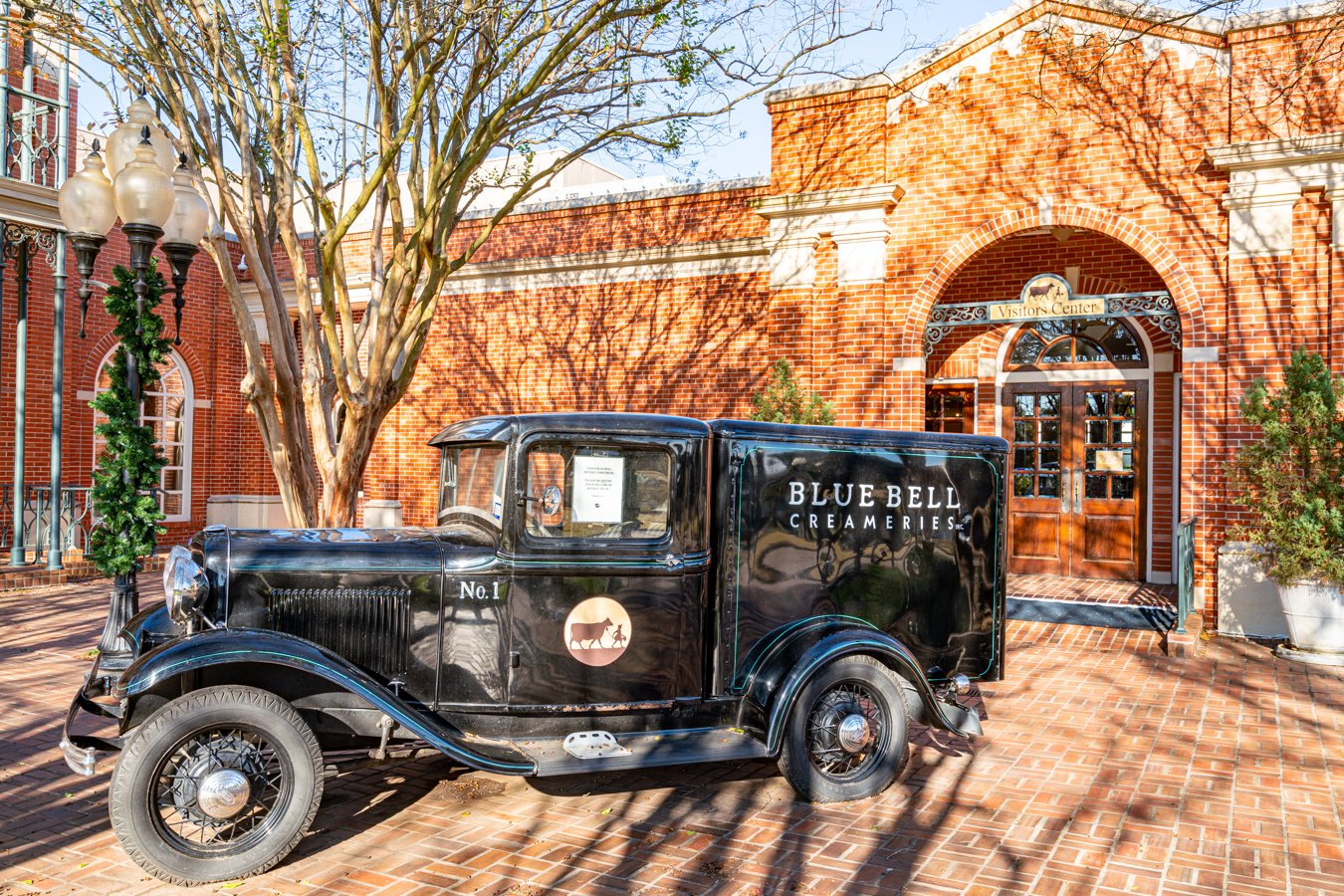 Beloved across the state, Blue Bell Creameries is a Texas institution–and what better way to enjoy the state’s favorite ice cream than by visiting Blue Bell in Brenham?

The original home of Blue Bell Ice Cream welcomes visitors to tour its Observation Deck, charming grounds, and–more importantly as far as I and kids across the state are concerned–gigantic scoops of ice cream served up in their on-site parlor.

Visiting Brenham and want to tour Blue Bell Creameries while you’re there? Here’s everything you need to know before you go! 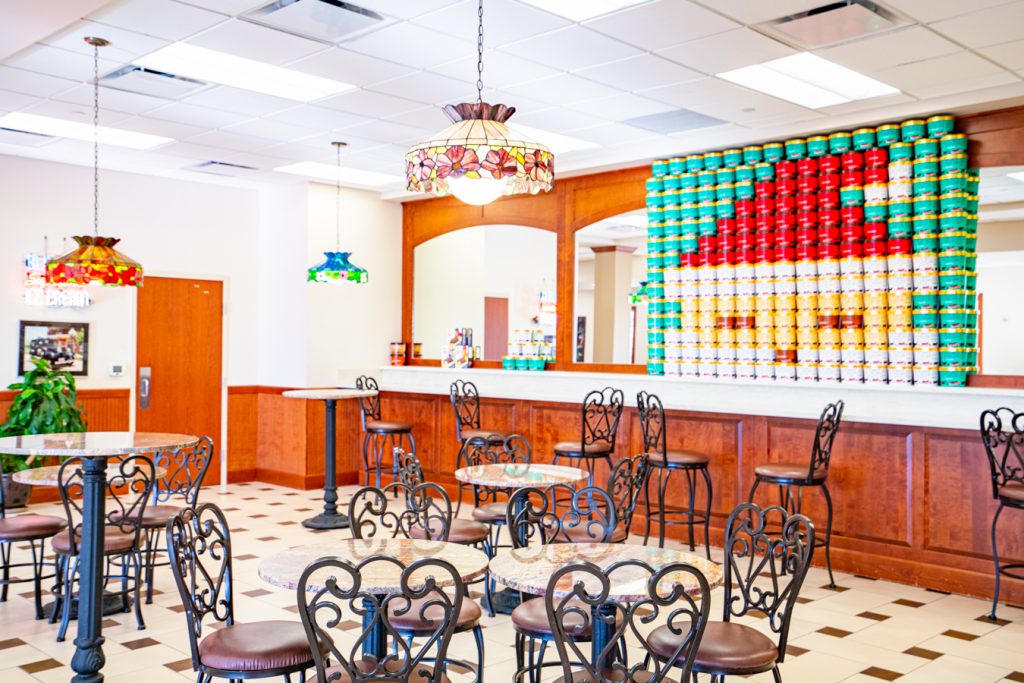 A Brief History of Blue Bell in Brenham

While Blue Bell has more than one creamery today (you can also visit one in Sylacauga, Alabama), it all started right here in Brenham, Texas, in 1907.

The Brenham Creamery Company was originally founded to produce butter, but as time wore on, the ice cream was what really stole the show.

In 1930, the company was renamed Blue Bell Creameries, in 1958, butter was officially discontinued and Blue Bell became solely focused on ice cream.

Texans have known and loved Blue Bell for generations (Mooo bars, Blue Bell ice cream sandwiches, and the Blue Bell individual cups are extremely fond memories from not just my childhood, but my dad’s), but it wasn’t until the 1980s that Blue Bell expanded outside of Texas. 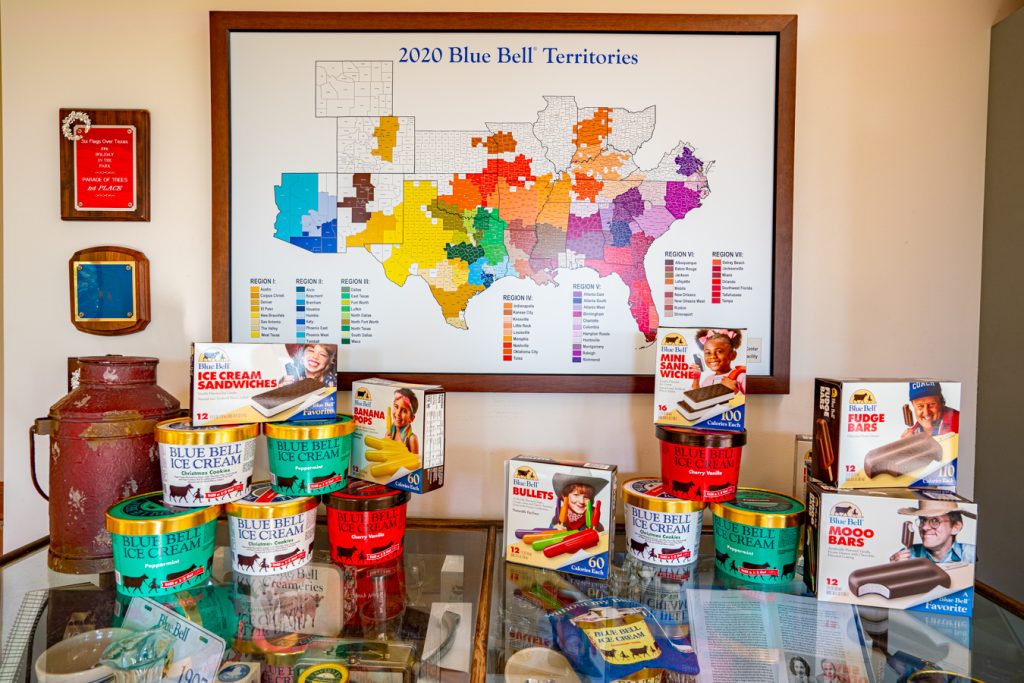 What to Do at Brenham’s Blue Bell Creameries

Grab an ice cream (or several).

Blue Bell’s second-floor Ice Cream Parlor is incredibly charming, featuring plenty of Blue Bell memorabilia–and for $1/scoop, you can sample one of 16 ice cream flavors on offer at the time, and/or a frozen treat like a Fudge Bar or Mooo Bar.

It’s a fantastic and very affordable way to have fun in Brenham, and since flavors rotate throughout the year, you never know exactly what you’re going to get. 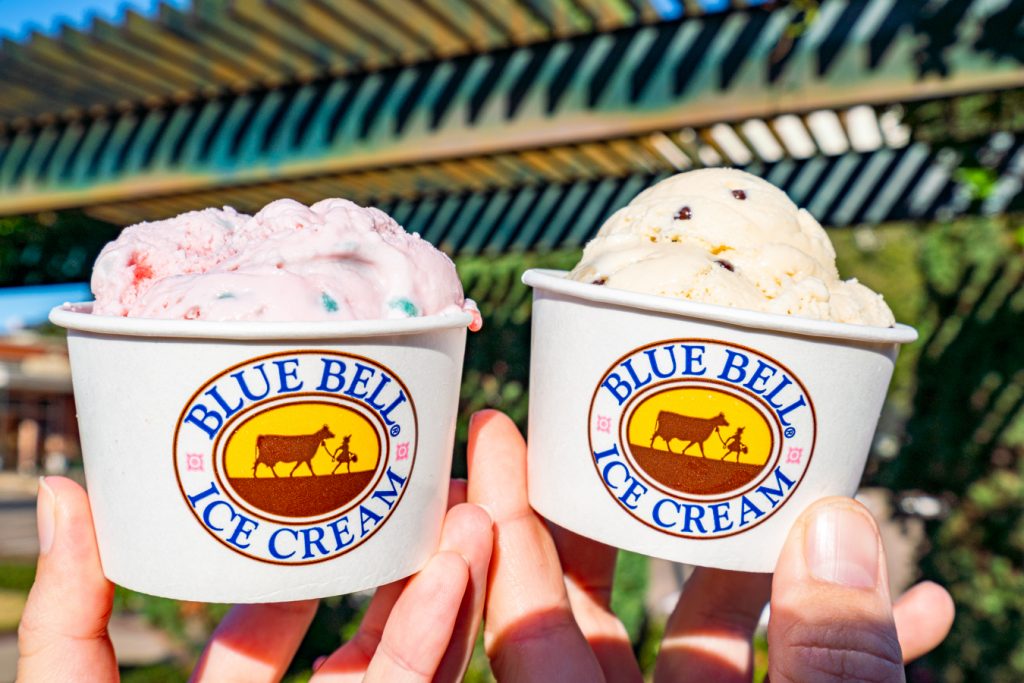 Want to watch Blue Bell be created in real-time? Head to the Observation Deck for a birds-eye view of how the ice cream is made!

READ NEXT
10 Fun Things to Do in Navasota, Texas

Snap photos of the creamery.

Not only is the Ice Cream Parlor charming and the Observation Deck incredibly interesting, but the grounds of Blue Bell Creameries in Brenham are also worth a peek, featuring statues, pretty corners, and even an old-fashioned ice cream truck. 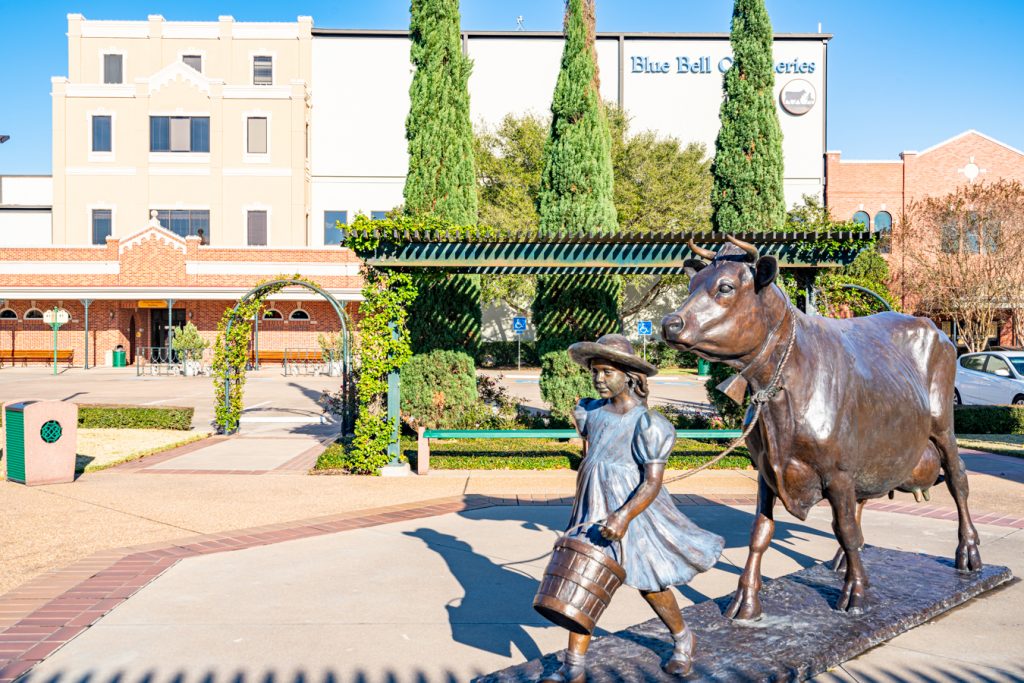 The Blue Bell Country Store is packed full of Blue Bell themed products–many of which are a nostalgic throwback to decades past!

Check out the Visitor’s Center.

Here, you can learn all about the history of Blue Bell, complete with artifacts and stories from decades past. 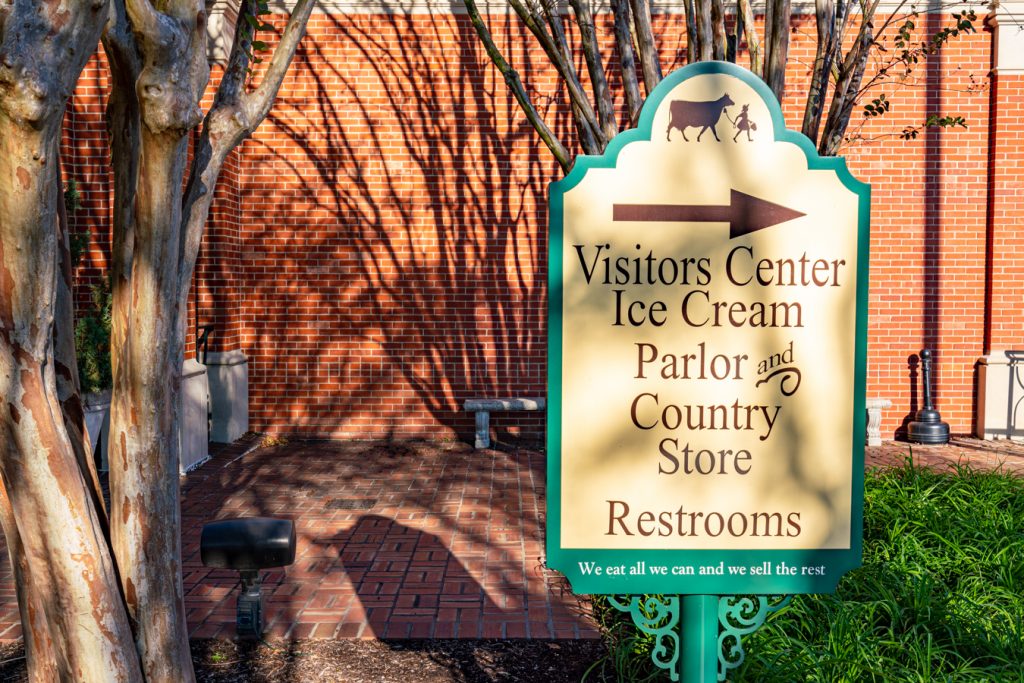 As you walk in to head to the Ice Cream Parlor, you’ll find a surprising sight on the first floor: a small museum dedicated to high school baseball in Texas!

Though small enough that you could almost consider it a display rather than a full museum, it’s a fun addition to visiting Blue Bell in Brenham. 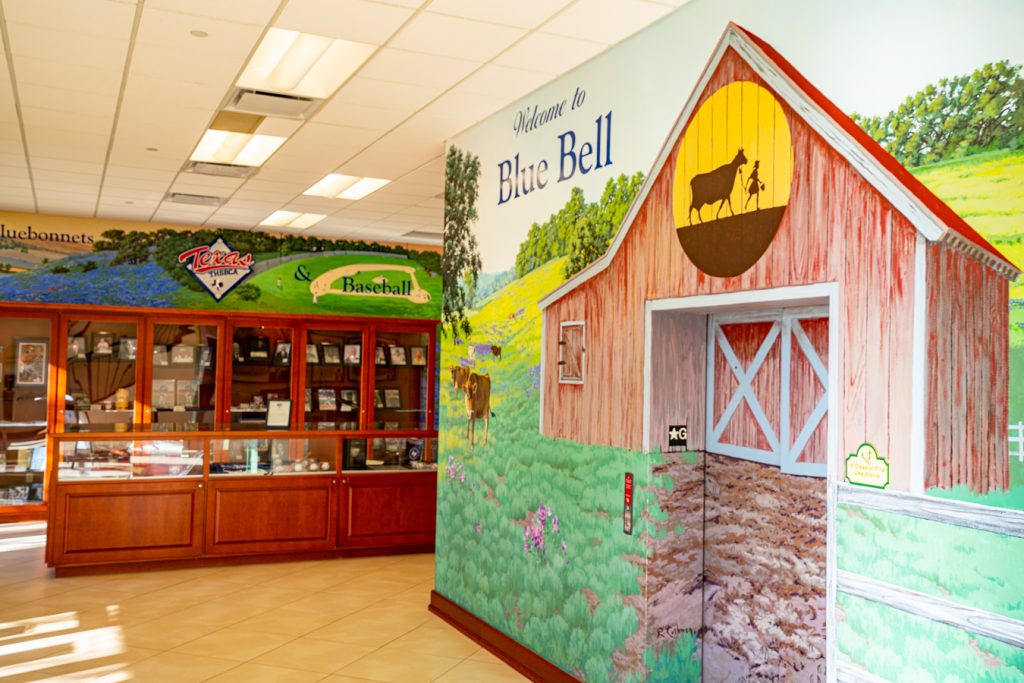 While you don’t technically have to order a giant helping of Blue Bell at the Ice Cream Parlor, it’s one of the best things about visiting!

Understand that you can’t tour the creamery floor.

Once upon a time, people visiting Brenham could take a more detailed Blue Bell tour to see how the ice cream was made on the ground–however, those tours have since been discontinued, and the Observation Deck now serves the same purpose.

… but it’s still worth visiting.

Even without a full tour, visiting Blue Bell Creameries Brenham is well worth it!

Enjoying a scoop at the Ice Cream Parlor and checking out the Observation Deck are some of the most fun things to do in Brenham, and a Blue Bell tour makes an excellent day trip from Austin, Houston, or College Station (and don’t forget to visit the rest of the beautiful town, too!).

Unfortunately, you can’t visit on the weekend, so be sure to plan your trip during normal business hours!

GPS directions will deliver you right to the front of the creamery, and the campus is well-marked. You’ll find the entrance for the ice cream parlor directly to the right of the large white building that says “Blue Bell Creameries” at the top.

Due to concerns surrounding health and safety in 2020, the Observation Deck is currently closed–however, the parlor alone is worth stopping to tour Blue Bell while in Brenham! 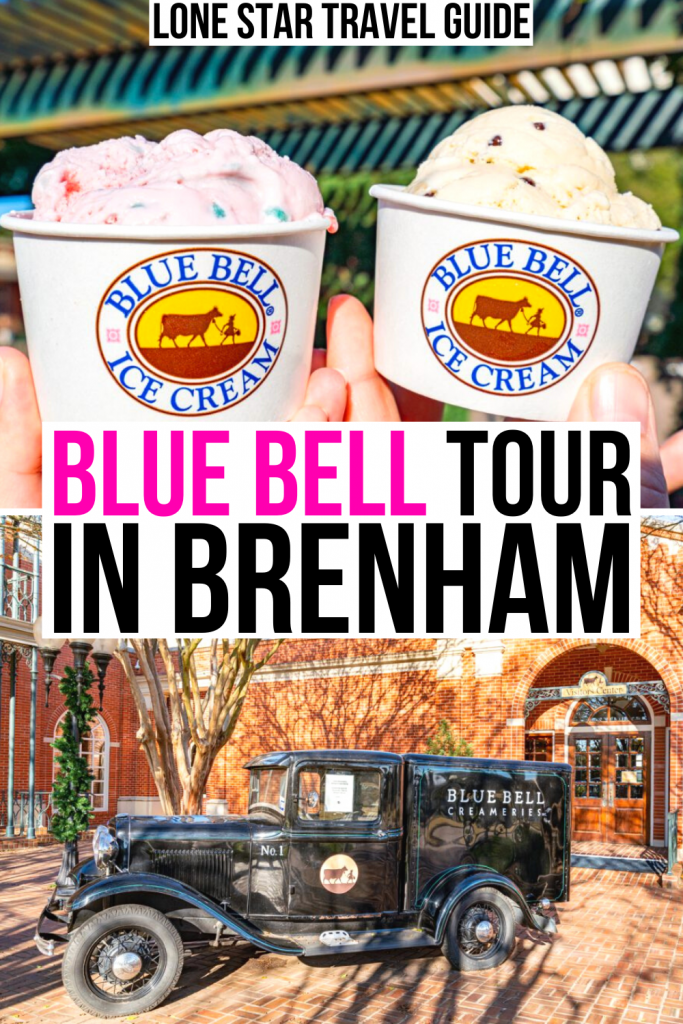