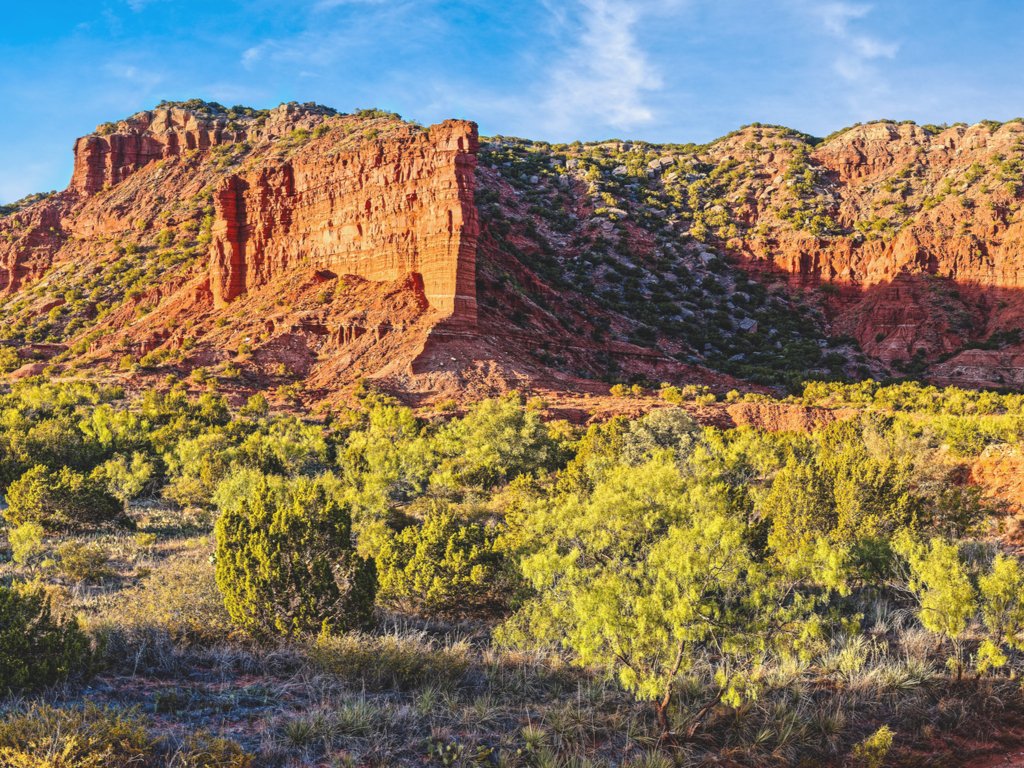 The biggest city in the Texas Panhandle may be known above all else these days for its location on Route 66, but for those who stop and stay for a while, you’ll find plenty of state parks near Amarillo that make excellent day trips, and even a couple of national parks (of a fashion, anyway) to check out!

Looking for cool national and state parks close to Amarillo?

Here’s where to look!

We’ve stuck with parks within a couple of hours of the city for this guide, to ensure that you can visit as a day trip from Amarillo. 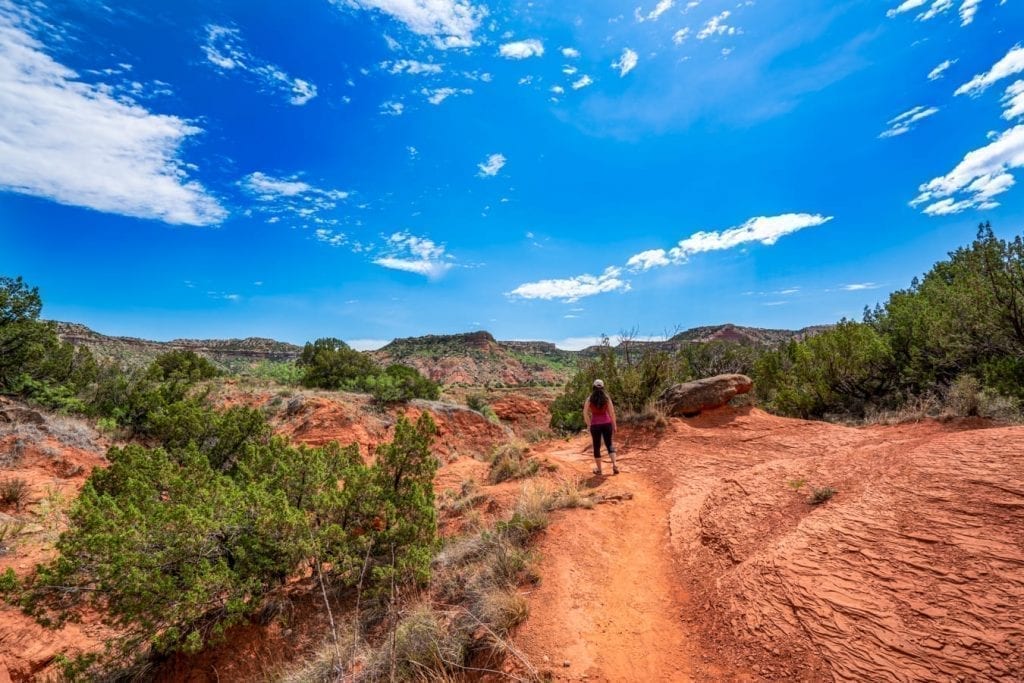 Nicknamed the Grand Canyon of Texas, Palo Duro Canyon just might be one of the coolest TX state parks out there–and it’s located practically next door to Amarillo!

There are plenty of hikes and overlooks to choose from, but be sure to prioritize hiking to the lighthouse formation!

The trail is scorching and can be a bit grueling, especially during the final ascent, but the payoff is absolutely worth it. 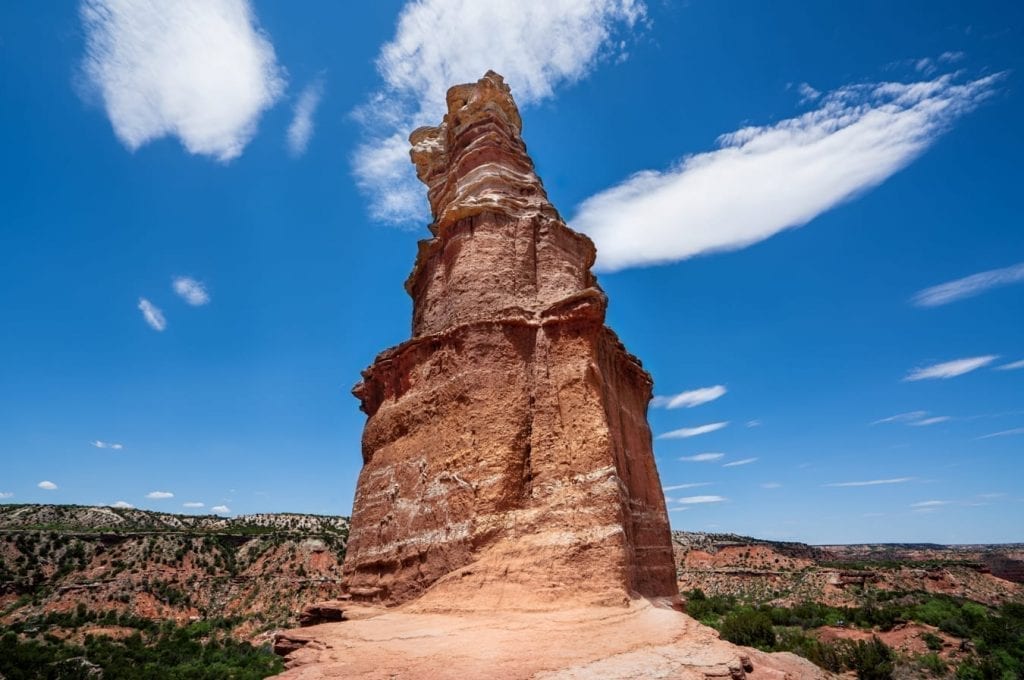 With nearly 90 miles worth of trails and plenty of beautiful, rugged scenery, Caprock Canyons State Park has long been a favorite among Texas hikers.

You’ll also find the official Texas Bison Herd living in this park–and may even be caught up in a bison traffic jam if they choose to cross the road in front of you.

READ NEXT
25 Amazing Things to Do in Amarillo

The popular Tunnel Trail, which takes place partially in an abandoned railroad tunnel, is also nearby, though not located inside this state park close to Amarillo. 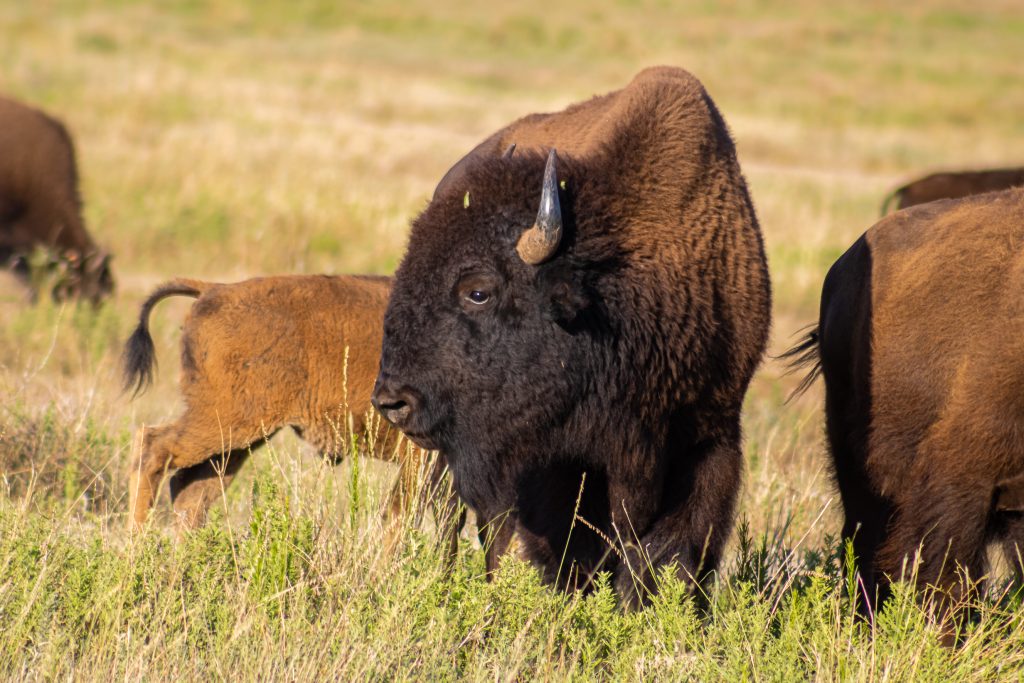 Whether you want to hike, fish, swim, go boating, or beyond, there’s something fun to do at Copper Breaks State Park!

This popular state park near Amarillo is one of the most beloved in the region.

Beyond the usual state park attractions, Copper Breaks State Park is also an International Dark Sky Park, and is known for its phenomenal stargazing!

You’ll also see some classic Texas cattle here: some members of the official State of Texas Longhorn Herd live at the park. 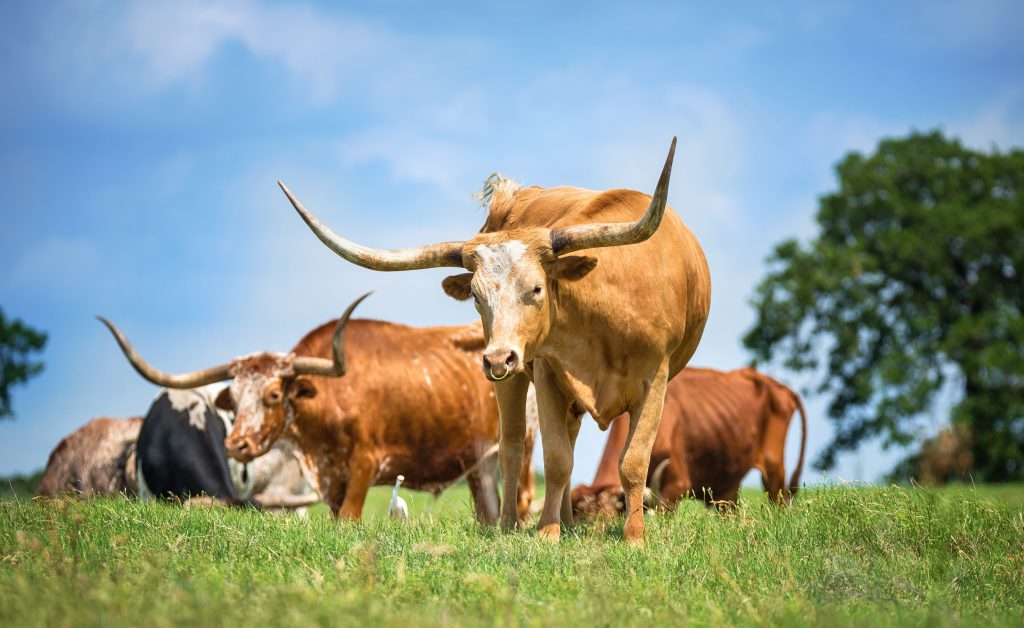 While Texas’ two official national parks–Big Bend National Park and Guadalupe Mountains National Park–are quite a drive away from Amarillo, there are several other federally managed lands in the Texas Panhandle Plains that make great places to visit!

Here’s where to head if you’re looking for national parks close to Amarillo.

READ NEXT
The 16 National Parks in Texas: A Complete Guide

Sought after by humans for more than 13,000 years, the flint located in Alibates Flint Quarries National Monument was once vital to the survival of many people.

This is one of the most unique places to visit in Amarillo, and a great opportunity to learn about the history of the region.

Join a Ranger-led hike to dive deep into the history of the area, or simply enjoy the beautiful views! 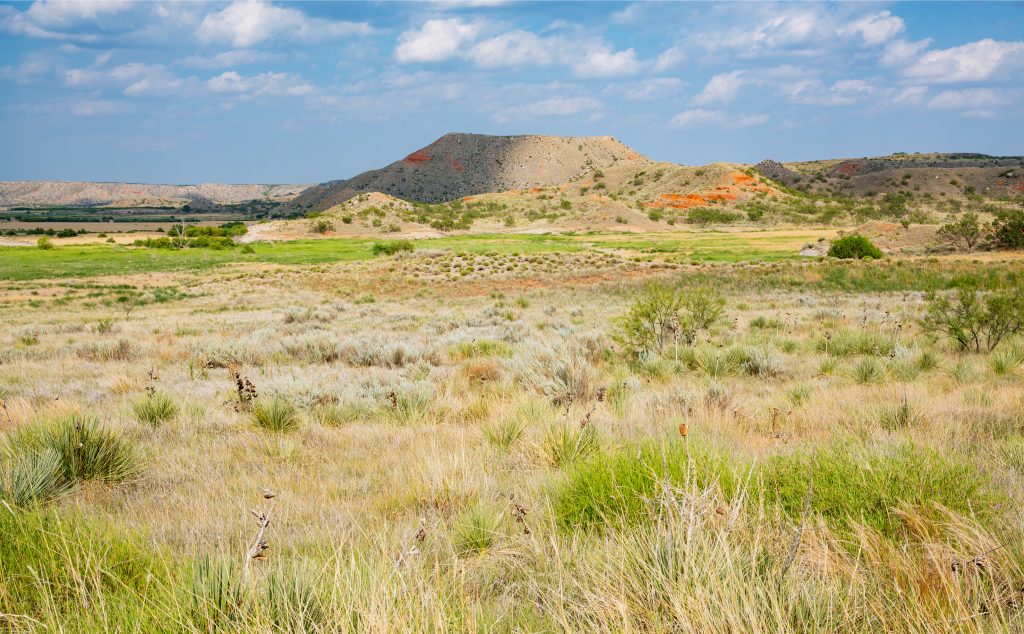 There are several hiking trails in the park, but you’ll also find options for kayaking, canoeing, fishing, boating, and more, ensuring that no matter what your preference for enjoying the water is, you’ll find something to do at Lake Meredith. 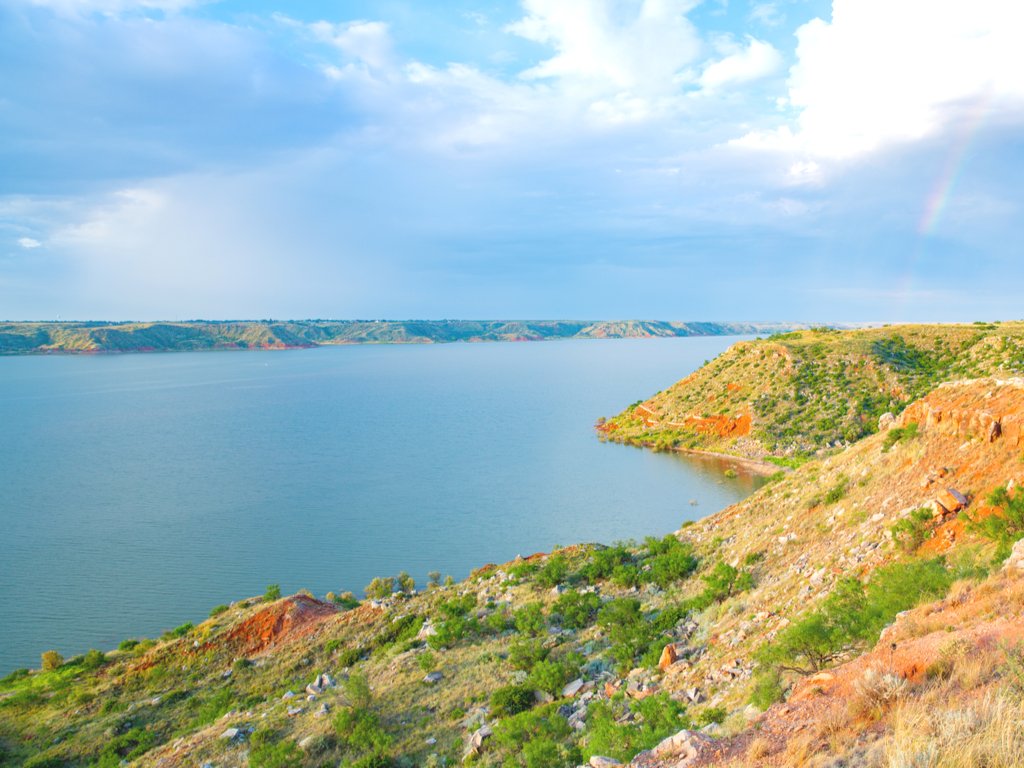 Stretching across 6,440 acres of grassland prairie, Muleshoe National Wildlife Refuge is the oldest wildlife refuge in Texas, and it makes for a fun Amarillo day trip!

It’s a wonderful place to spot wildlife, especially migratory birds (it is particularly known for its population of lesser sandhill cranes when they pass through during migration).

There are two very short trails in the park, but it is mostly known for its wildlife, not hiking. 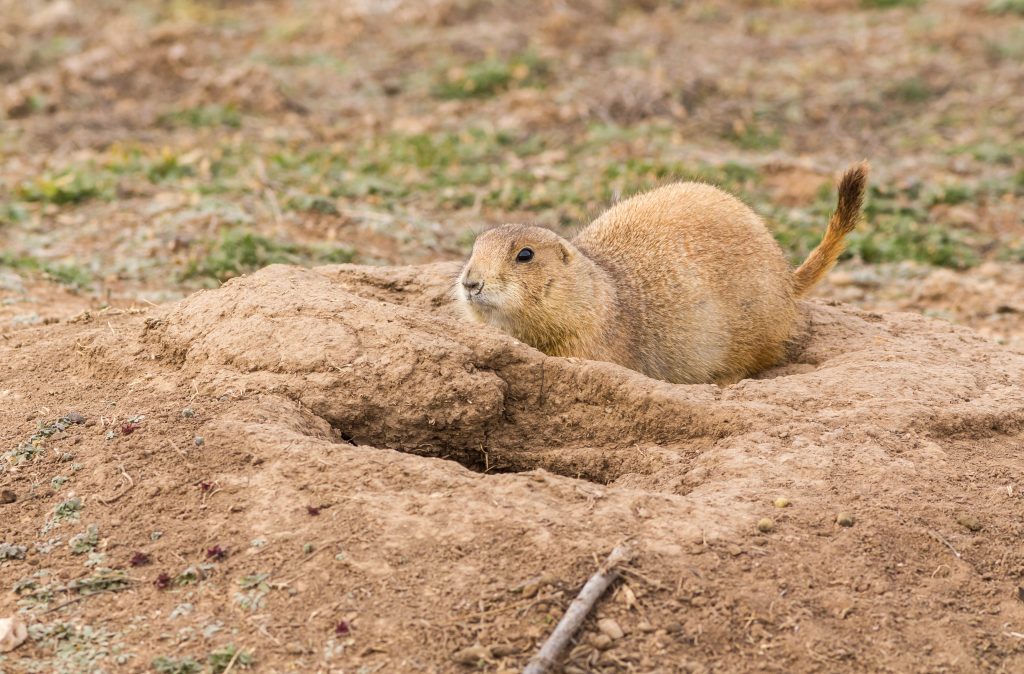 For a chance to appreciate diverse wildlife, you can’t beat a visit to this national park near Amarillo, Texas.

Managed by the U.S. Fish and Wildlife Service, Buffalo Lake National Wildlife Refuge protects more than 300 species of migrating birds that pass through each spring and fall, as well as a wide expanse of grass prairie lands, where, among other things, you can spot black-tailed prairie dogs!

READ NEXT
21 Unique State Parks in Texas to Visit

The park has 4 short hiking trails to explore, as well as a scenic drive and an overlook to check out. 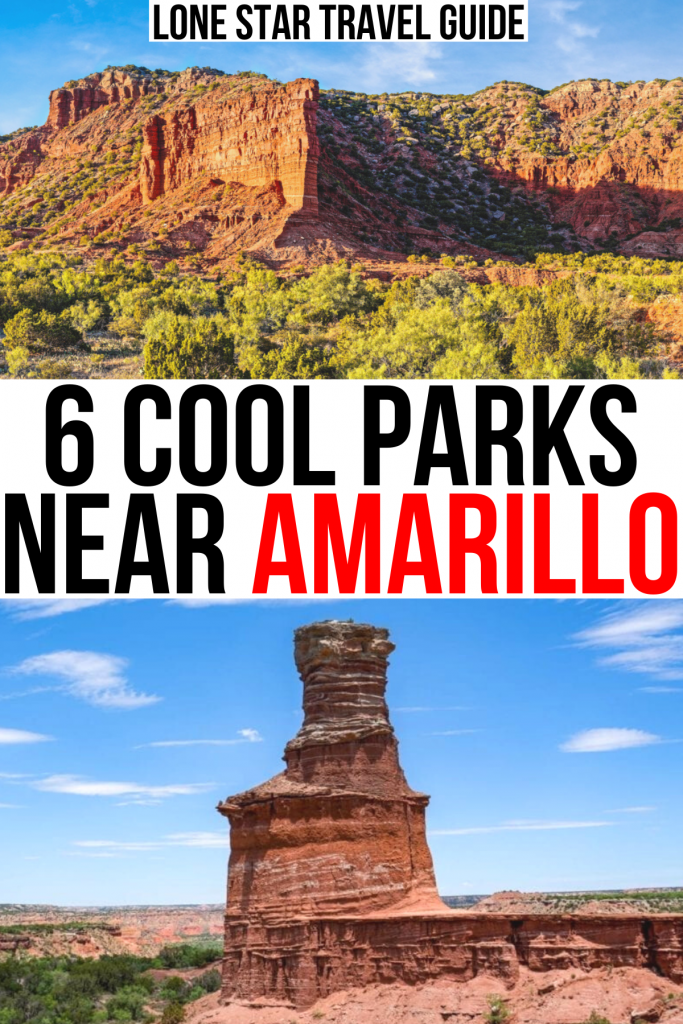