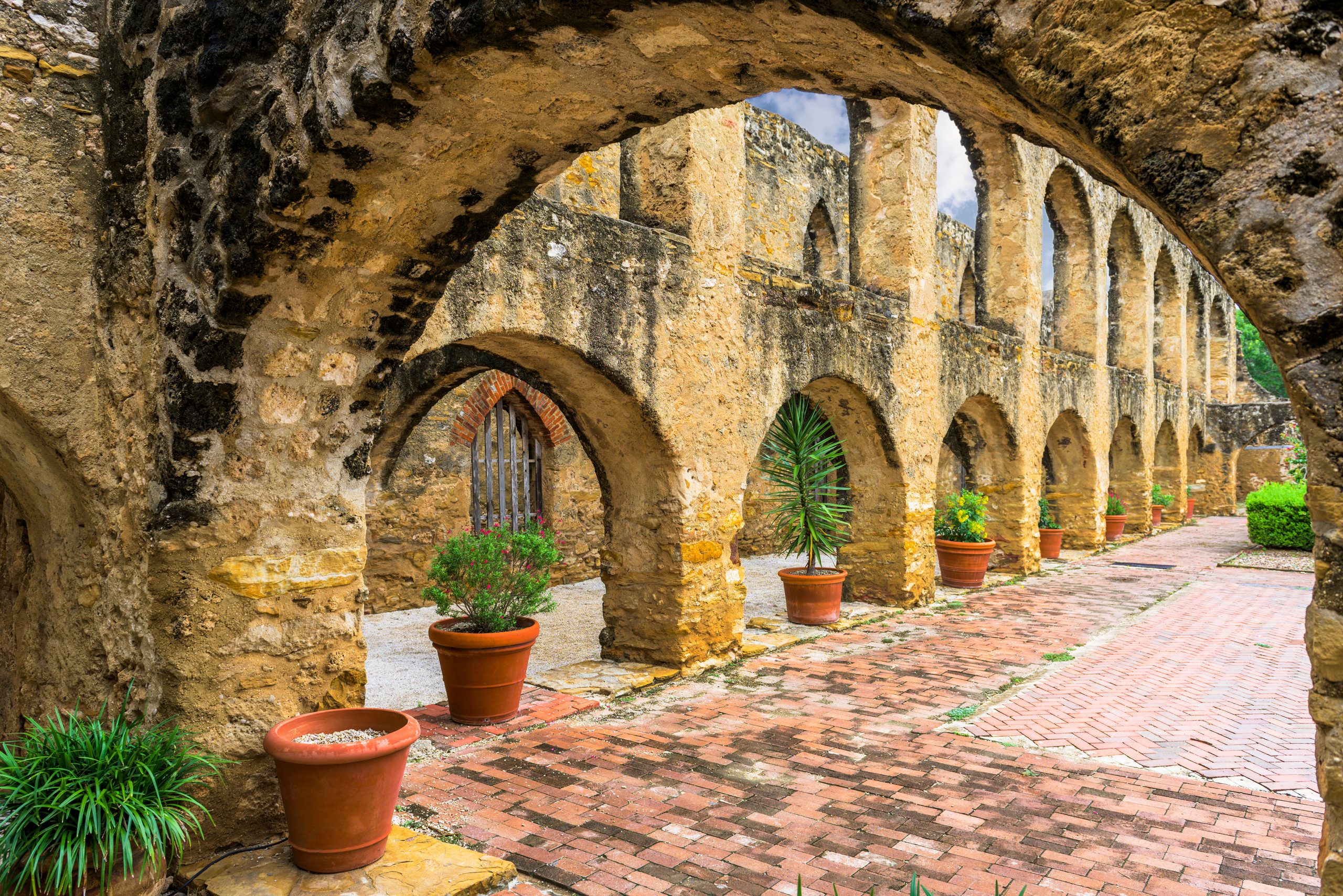 From the legacy of its Spanish colonial past through the era of the cattle kingdom, the varied history of the Lone Star State has left many treasured historical sites in Texas to visit and explore.

Here are some of the best Texas historical sites to visit in order to learn more about the story of Texas! 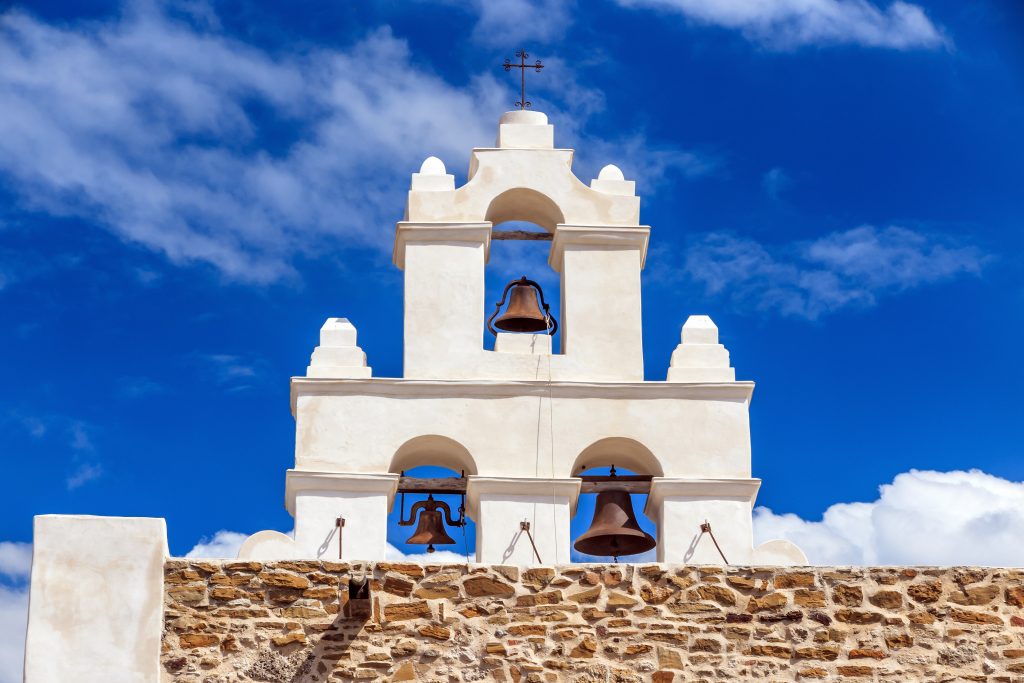 Referred to as the birthplace of Texas and located just north of Navasota, this historical treasure has several buildings to tour within the park. The Star of the Republic Museum covers the history, wildlife, and natural environment of the state. The museum also has artifacts and settings that bring the history of the state and its colonization to life.

Independence Hall sits on the park grounds, commemorating the 59 delegates who signed the Texas Declaration of Independence in March of 1836. This building is just a short walk from the museum listed above.

One of the most unique experiences at this park is Barrington Plantation, also referred to as Barrington Living History Farm. Experience what life in the 1850s was like as you tour the house and ground of the Republic of Texas’ last president, Anson Jones.

Not only is the house full of furniture and artifacts that are authentic to the time period, but, since it remains a working farm, it also allows for a hands-on experience for kids and adults that is one of a kind. 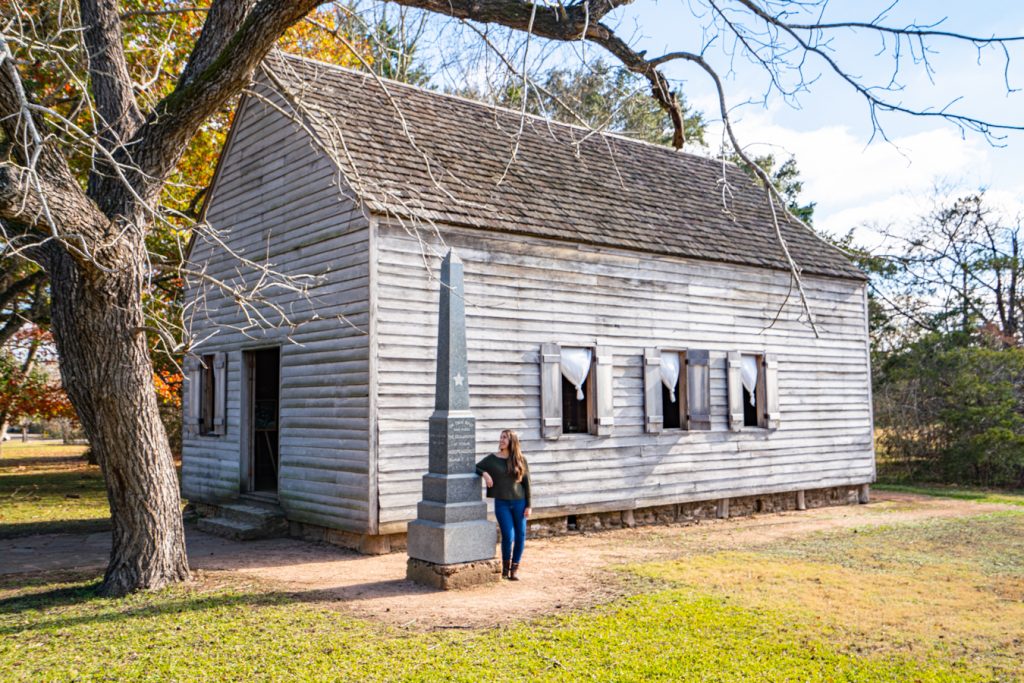 Few visitors arrive in Texas that have never heard of the heroic sacrifice of the Alamo. Built as part of a larger mission complex, the chapel called the Alamo, is part of both the Spanish colonization of Texas and the Texian fight for independence from Mexico.

The complex is located in the downtown part of San Antonio, it includes the chapel and the old barracks.

The Alamo complex houses a museum and artifacts from the revolution. The chapel houses the national or state flags of all the defenders, along with personal artifacts and memorabilia.

Look at the walls inside and outside the chapel which still bear witness to the shots fired during the battle.

What once was the barracks for priests and troops now houses a museum telling the story of Texas’ history from the original colonial settlement through the Texians’ battle for independence and victory.

Built in 1852, this lighthouse is fairly small–a mere 75 steps will bring you to the top–but it is among the most unique historical sites in Texas as well as one of the best lighthouses in Texas to visit.

READ NEXT
11 Fun Things to Do in Port Isabel: Lighthouse + Beyond!

It’s worth visiting both to enjoy the views of South Padre Island from the top and to learn a bit about Texas’ maritime history.

In addition to climbing the lighthouse, be sure to visit the small museum next door, which is housed in a reconstructed version of the keeper’s cottage. 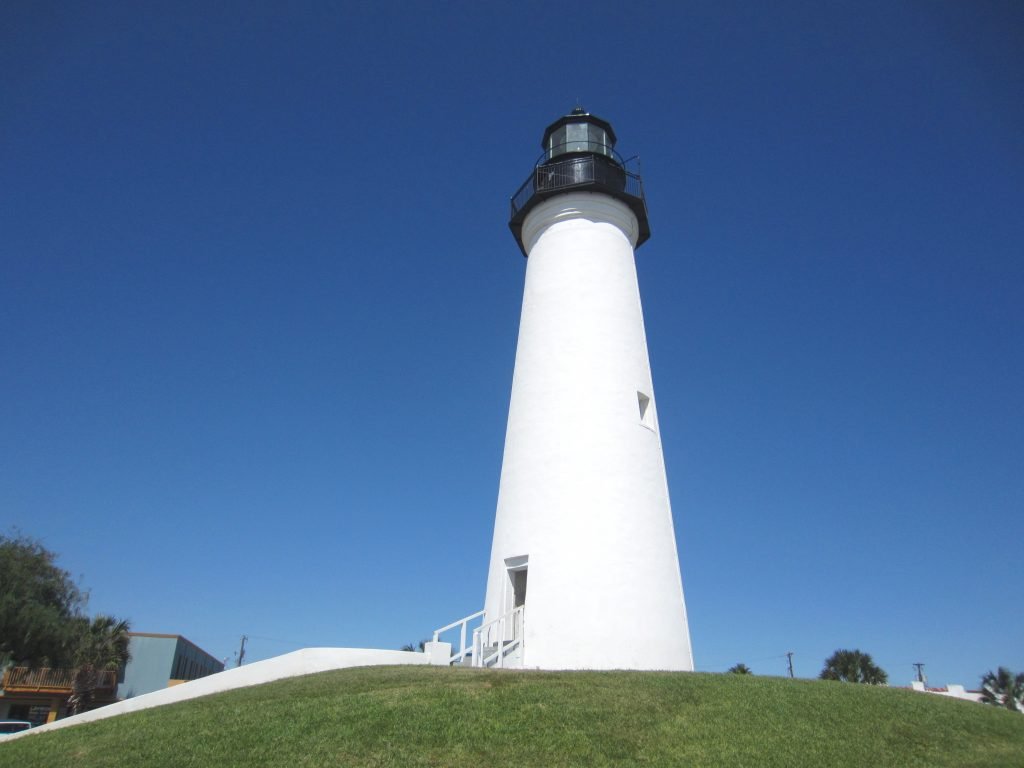 Four missions make up the park and help visitors better understand the history of the Spanish missions and colonization of Texas. The preservation of these missions began during the last half of the twentieth century.

The missions demonstrate the mindset of the Spanish priests and their dedication to the concept of converting the Native American tribes to Catholicism.

Mission Concepcion is one of the oldest stone mission churches in Texas, and sits preserved but unrestored, capturing its unique history in Spanish Texas.

Mission San Jose is the largest of the park’s missions and has been nicknamed the “Queen of Missions” and was fully restored prior to World War II. Mission Espada was the first mission built in Texas.

The restored irrigation canals and agricultural fields of Mission San Juan give visitors a different perspective of the age of missions.

Each mission is about 2.5 miles from the next, and on beautiful days in San Antonio, you can rent a bike to travel between the missions. 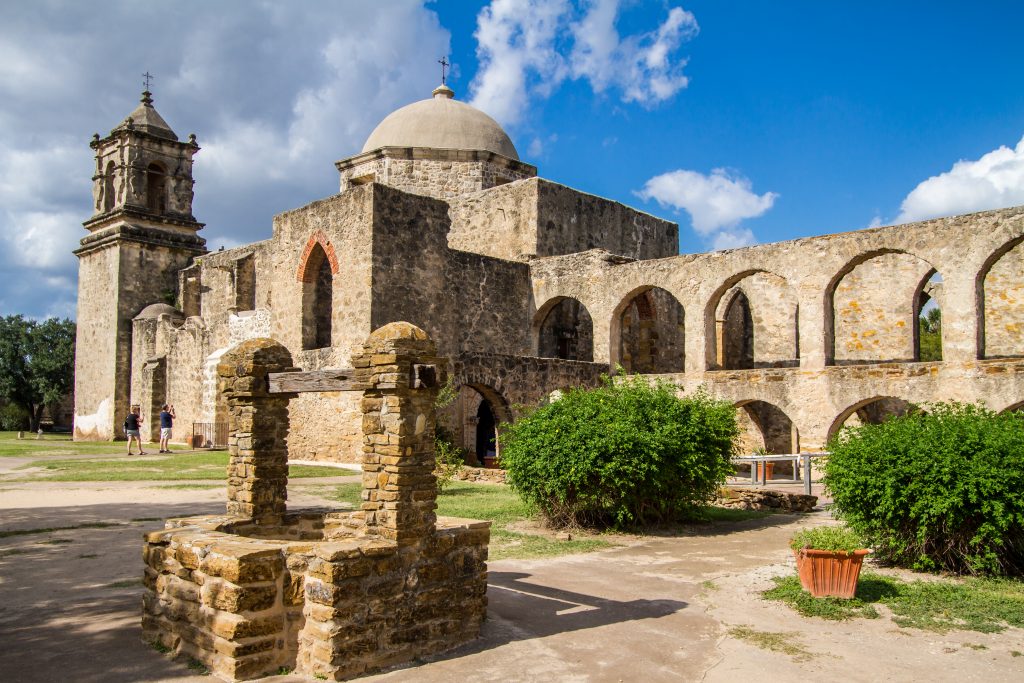 The San Jacinto Monument, located in Deer Park along the banks of the San Jacinto River, marks the final battle in Texas’ fight for independence from Mexico.

The star topped monument commemorating this even stands 570 feet tall, taller than the Washington Monument in Washington, DC.

The Jesse H. Jones Theater at the base of the monument tells Texas’ story along with the evolution of its history as part of the wild west. The monument has several permanent exhibits as well as rotating and online exhibits.

Walk the grounds of the battlefield, reading the markers which tell the story of the troop movements and events of those fateful days of April 1836.

While the park and grounds are open throughout the year, the best time to go is around the third or fourth weekend in April when the San Jacinto Day Festival holds a reenactment of the historic battle between the Texians under General Sam Houston and the Mexican Army under the leadership of President Santa Anna. 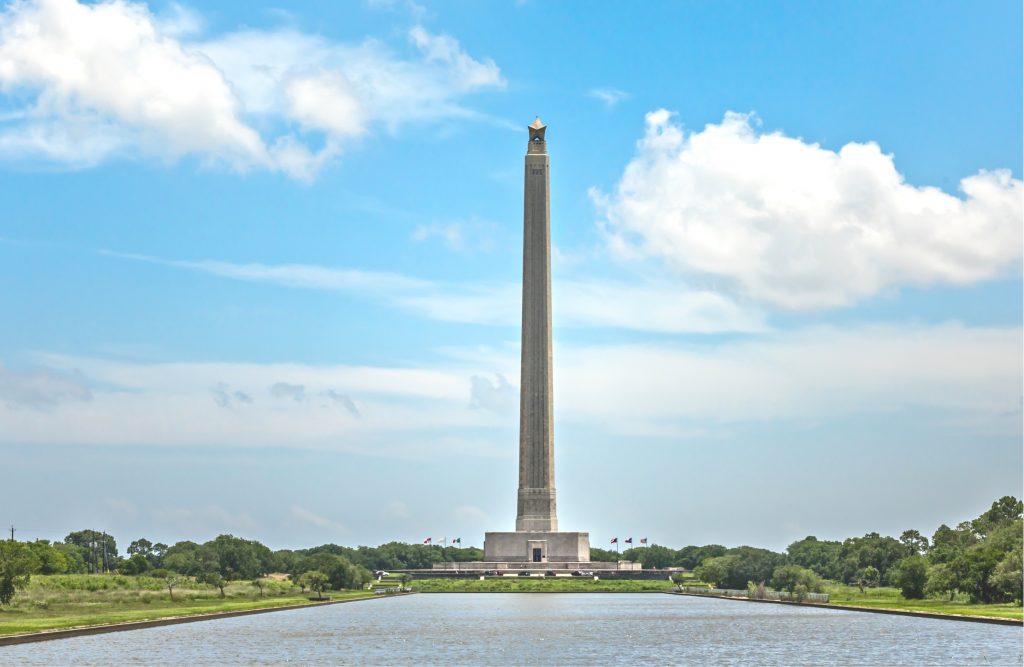 A thirty-minute drive southwest of Houston brings visitors to the George Ranch Historical Park in Richmond, Texas. Unlike most, this ranch brings life in nineteenth-century Texas full circle with its four main housing complexes which span a hundred years of history as each generation of this family puts its own mark on the land.

The original 1830s Jones Stock Farm is one of the earliest Northeast Mexican Anglo homesteads, consisting of a dog-run log cabin, the summer kitchens, and stock farm buildings for visitors to explore.

The 1860s Ryon Prairie Home of the Jones’ oldest daughter features life in post-Civil War Texas as the cattle industry begins to experience the boom which would become the cultural icon for the state during the 1870s and 1880s.

The Davis Victorian Complex shows the family’s wealth of the 1890s where visitors can tour the house, family cemetery, blacksmith shop, a sharecropper’s farm, longhorn cattle pens, and a railcar.

The last direct descendant would build the 1930s George Cattle Complex, which includes the George Ranch Home, the Cowboy Barns, and the Cattle Pens.

All four generations left an incredible architectural fingerprint on the land and give visitors a better understanding of the agricultural history of the region. All buildings are in relatively easy walking distance, filled with the original furniture and family memorabilia that makes this a must-see for any history lover. 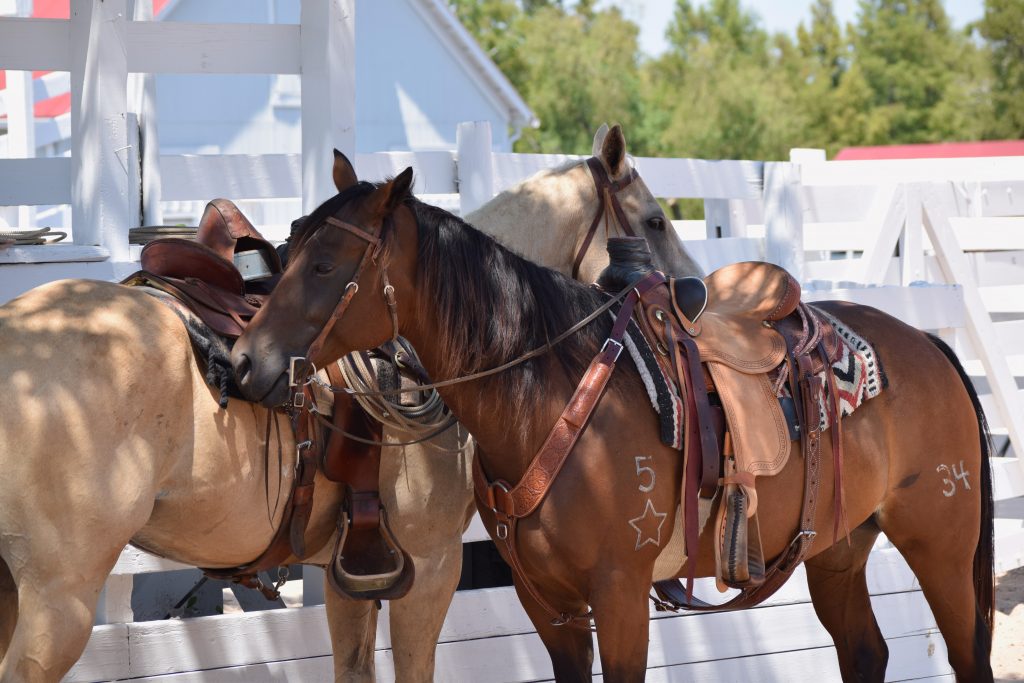 The Pioneer Museum located in downtown Fredericksburg offers a glimpse into the nineteenth and twentieth century settling of this region of Texas by German immigrants.

The museum complex covers a little over three acres and houses multiple buildings to tour. The grounds contain a historic homestead, an old schoolhouse, a barn, a bathhouse, and a smokehouse.

The historical artifacts give the visitor an understanding of the commonplace items and lifestyle of settlers in the late 1800s. One of the most unique aspects of this tour is the recorded memories that play in the various buildings.

The descendants of the original settlers have recorded readings or memories that play in various rooms and buildings on the site, offering a unique perspective for visitors.

If you are in the area, it is definitely worth spending 3-4 hours at this unique experience. 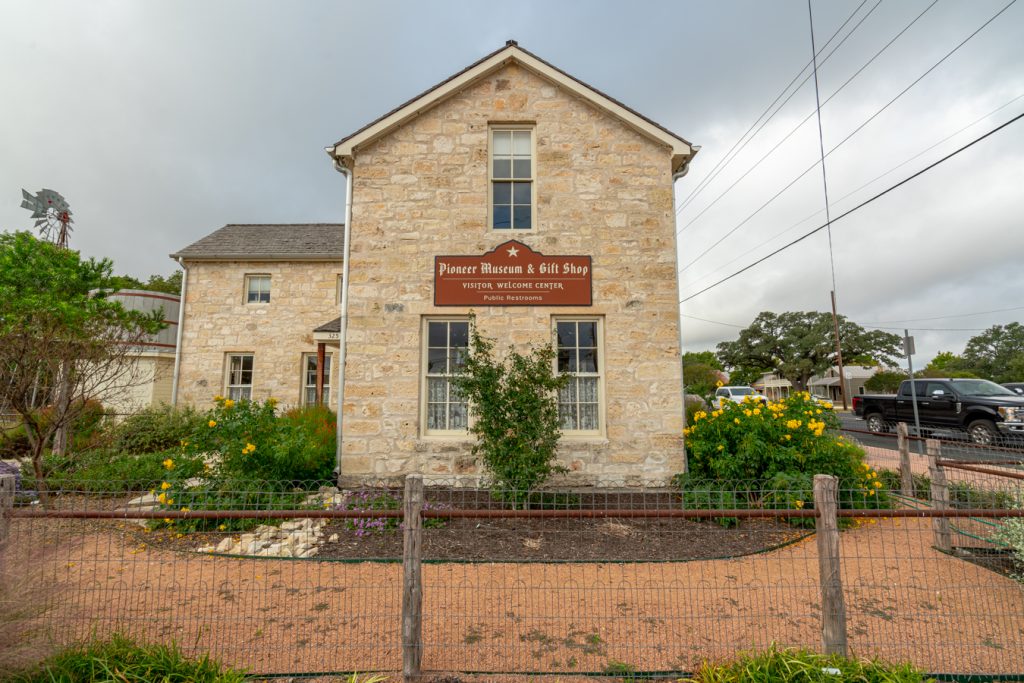 Located in Beaumont, this Texas historic site memorializes the foundations of Texas’ oil industry at the turn of the twentieth century.

Later nicknamed the Lucas Gusher, the original rig was built on Spindletop Hill in the late 1890s but didn’t hit oil in the salt dome until 1901.

Currently located off of Highway 96 between Beaumont and Port Arthur, the Spindletop Oil Field pays homage to a by-gone era in Texas economic history.

READ NEXT
13 Cool Things to Do in La Grange, Texas

The oil field and many of its wooden structures have been preserved for tourists.

Not only is there a daily “gush” of oil reenactment, but the many commonplace parts of life are there to explore, like the general store, post office, dentist office, and a working print shop.

Tour the grounds and enjoy a picnic while taking part in the event that changed Texas and brought unprecedented economic growth to the state in the twentieth century. 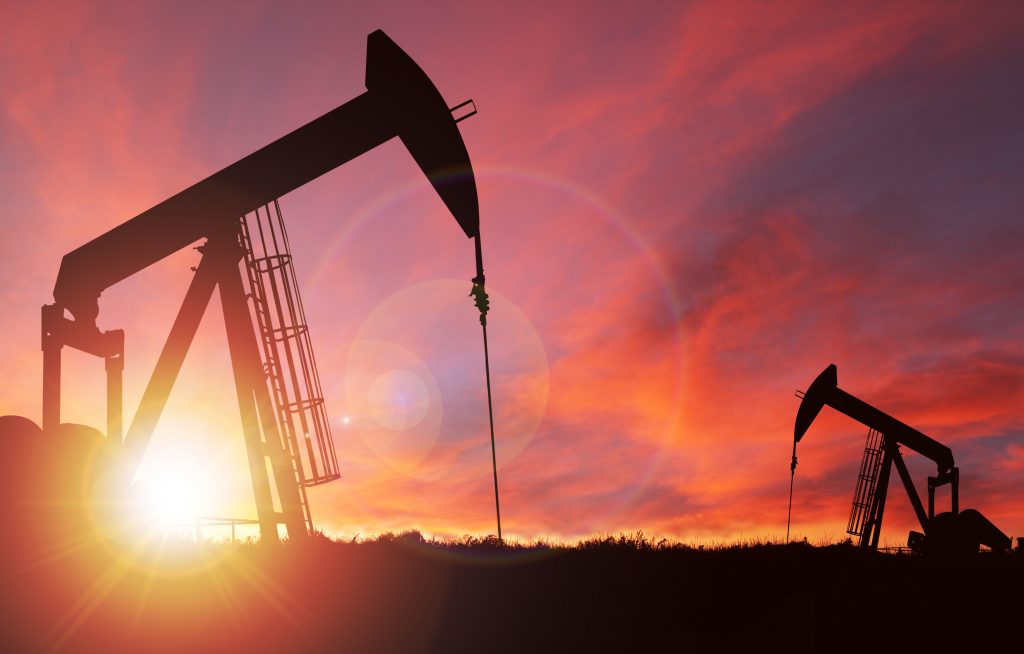 Listed on the U.S. National Register of Historic Places, this beautiful building was originally built in 1982 for a prominent Galveston family and is one of the best historical sites in Texas.

This building has played various roles in the city over the century, including being a refuge for those seeking shelter during the Great Storm of 1900 when Galveston was almost destroyed by a hurricane.

The main rooms hold historic furniture, maps, and historical artifacts, telling the story of the city’s rise and fall as a significant seaport in the Gulf of Mexico.

This opulent mansion was built in 1895 and was the primary family residence for almost a century.

Today the rooms are still filled with furniture and personal artifacts that represent the many generations who have lived in the house.

There are twenty rooms available for touring.

The mansion is a treasured piece of Galveston history and represents one of the most prominent families from the golden age of Galveston’s past. 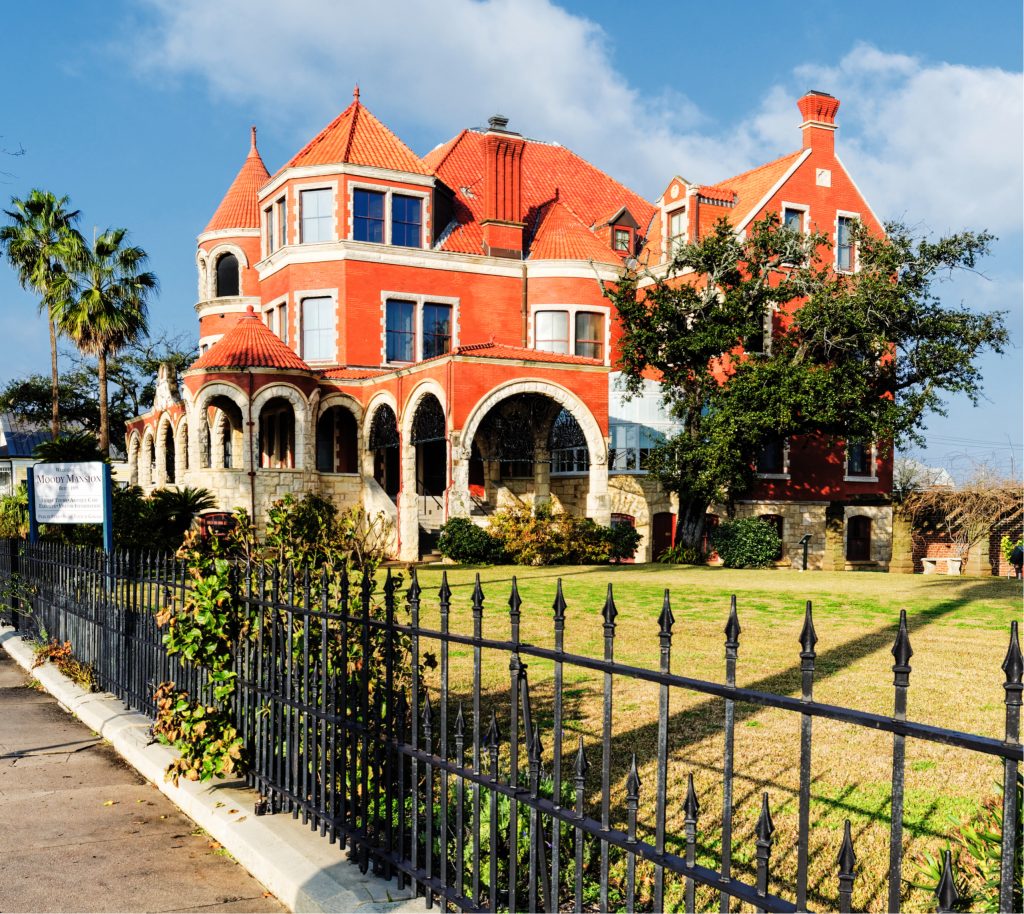 Located near the South Texas town of Presidio, near Big Bend Ranch State Park, Fort Leaton gives its visitors a unique perspective of the Spanish heritage in Texas.

The largest surviving adobe structure built in Texas, Fort Leaton was conceived and built as a trading post and homestead along the Chihuahua Trail near the Mexico-Texas border.

While most of the buildings reflect a mid-nineteenth century style, many of the adobe original structures incorporated into the complex date from earlier Spanish settlement.

Visitors can explore the hacienda-style home and trade center’s history. Walk through the corral and bakery to the traditional patio and family quarters. Visit the blacksmith shop, the so-called “dungeon”, and the guard’s room.

You can get a rare glimpse into South Texas trade routes and life on the wild frontier of the nineteenth century at this Texas historic site. 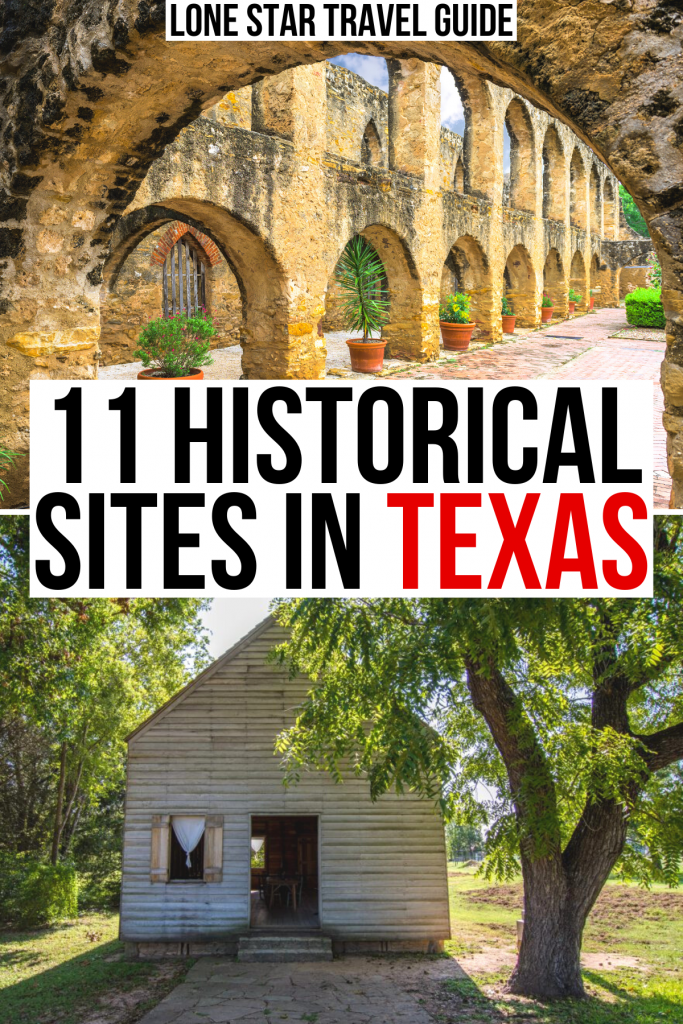