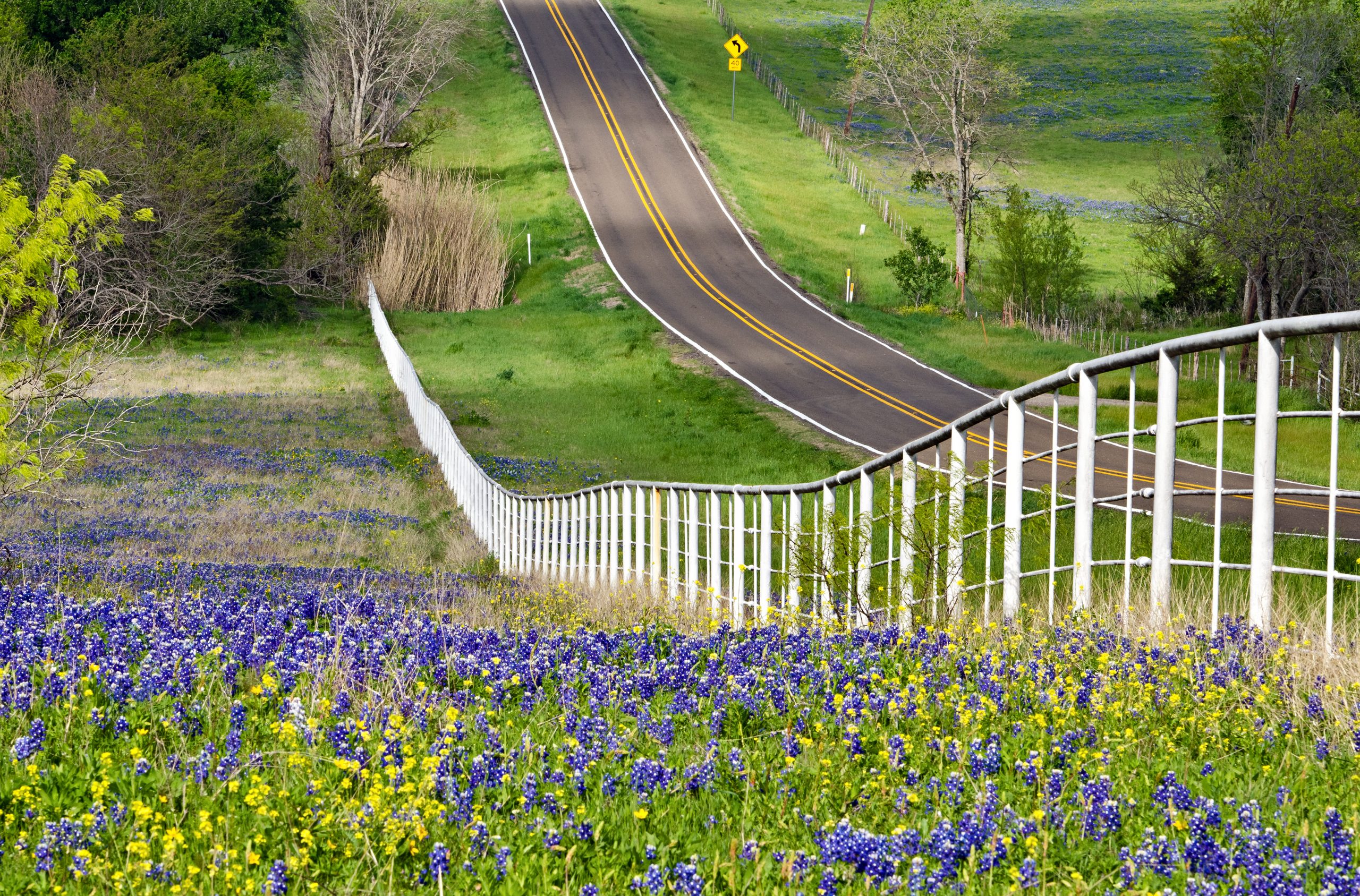 There’s absolutely no better way to explore the Lone Star State than on an epic Texas road trip, and we’ve created this road trip guide to show you some of the best ones around!

From Texas’ largest cities to its open plains, from its laid-back beach towns to its wine country, there is no shortage of variety when it comes to what you can experience in Texas.

Here are the best road trips in Texas–plus a few tips to keep in mind before you go.

For first-time visitors to Texas and Lone Star State lovers alike, it’s hard to imagine a better short Texas road trip than the route between Austin and San Antonio–especially because it is so customizable!

While Austin and San Antonio are less than 2 hours apart (allegedly–traffic often has other plans), here are just a few things to you can potentially do on the way: float the river in New Braunfels, swim in Hamilton Pool in Dripping Springs, shop in San Marcos, and eat some of Texas’ best barbecue in Lockhart.

If you’d like to extend the trip, consider making a triangle between the two cities by adding a stop in Fredericksburg to enjoy some of Texas’ German history, drink local wine, and climb to the top of Enchanted Rock.

Plus, of course, there are the cities themselves: both Austin and San Antonio are home to enough fun things to do to keep you busy for weeks, from the Alamo to the Texas State Capitol and beyond.

Since the driving distances are so short for this road trip, a four or five day trip is enough to give you a nice overview of the area–but the sheer number of things to do nearby means that you could easily triple that time without getting bored! 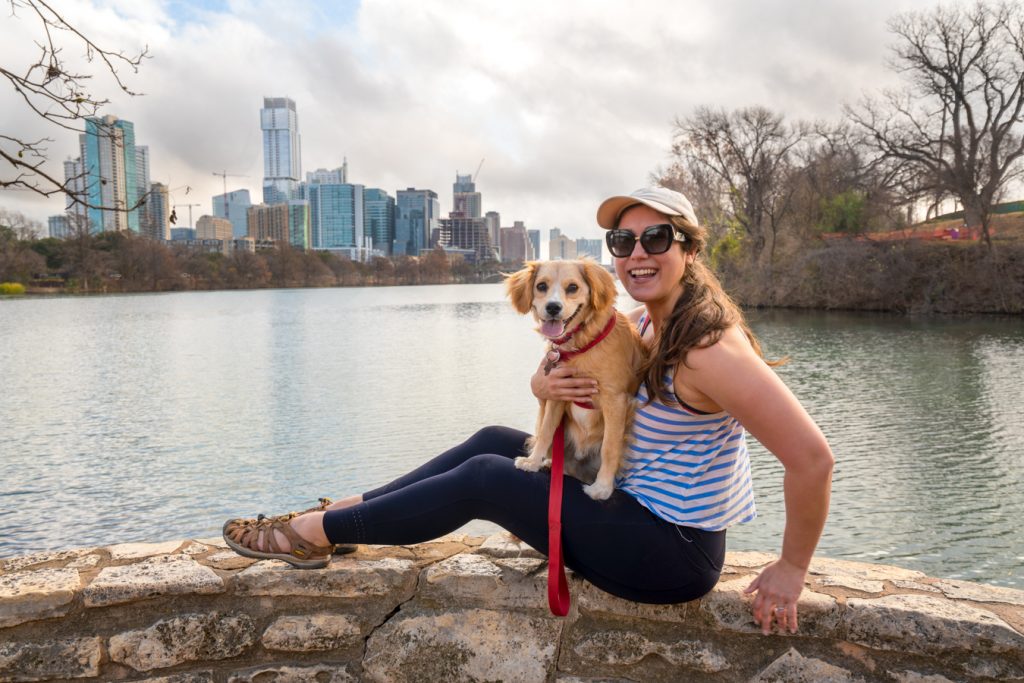 This Texas road trip also focuses on the general region between and around Austin and San Antonio–also known as the Texas Hill Country–but instead of focusing the trip on the area’s two large cities with a few stops along the way, this one is focused entirely on the countryside.

Starting from either Austin or San Antonio, head out into the Hill Country to explore the official Texas Wine Trail, stop by whimsical Wimberely to experience Jacob’s Well and its colorful downtown, scarf down German food in Fredericksburg, sample barbecue in Lockhart, swim in Dripping Springs, head to the LBJ Ranch, and stop by the positively tiny town of Luckenbach.

Be sure to also mix in plenty of outdoor beauty: Enchanted Rock, Pedernales Falls State Park, Natural Bridge Caverns, and Guadalupe River State Park (one of the most popular spots for floating the river) are all accessible on this Texas road trip. 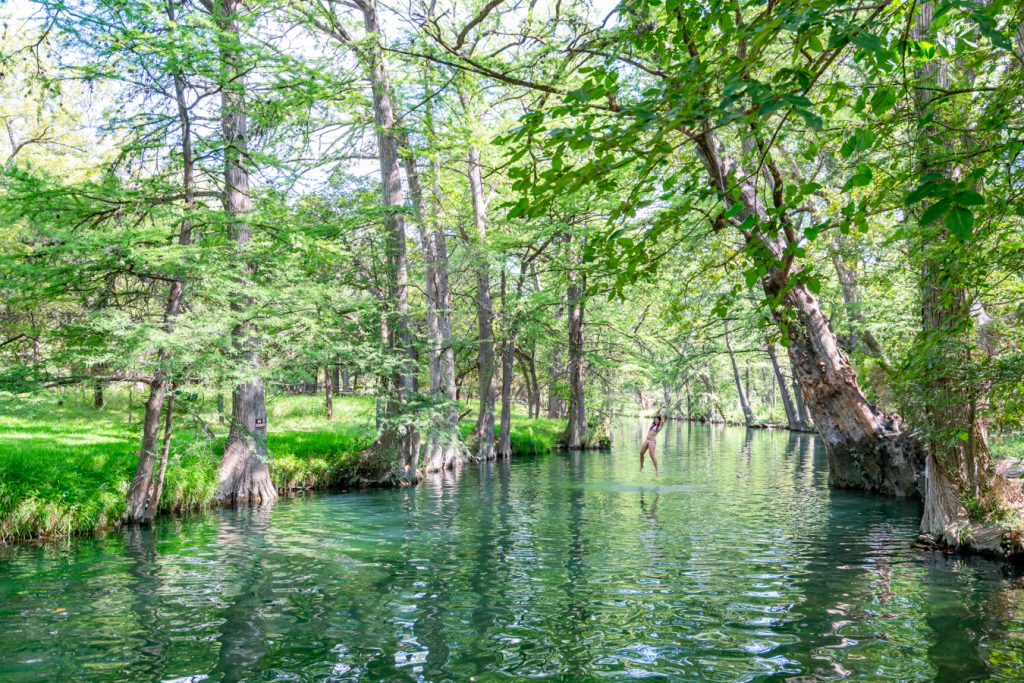 Texas’ portion of Route 66 is fairly short–you can drive it straight across the panhandle in about 3 hours without stopping–but it definitely makes for a classic Texas road trip!

Along Route 66, by far the biggest city you’ll pass is Amarillo, where you should definitely stop to check out the Historic Route 66 District, the American Quarter Horse Museum, and–for the very, very hungry–the 72 oz. steak challenge at the Big Texan Steak Ranch (don’t worry, they have more human-sized portions on offer too).

You’ll definitely want to swing by Cadillac Ranch as well, located just west of Amarillo, for a sight that you just don’t see everyday: 10 Cadillacs with their frontends buried in a field, spray-painted within an inch of their lives.

Lesser-known Slug Bug Ranch (similar concept as Cadillac Ranch, but with slug bugs) is located on Route 66 as well, but on the eastern side of Amarillo.

Though it’s not technically on Route 66 itself, I also highly recommend swinging south of Amarillo to check out Palo Duro Canyon, the second-largest canyon in the USA and an unforgettable place to visit!

While you can easily drive Texas’ portion of Route 66 in a single day, we recommend spending a night or two in either Amarillo or Canyon to enjoy the nearby sights and some of the hikes in Palo Duro Canyon!

West Texas is not only home to the sprawling, harsh desert landscapes that the Lone Star State is often associated with, it’s also home to both of Texas’ national parks, which can act as the backbone to a phenomenal Texas road trip.

After exploring some of the best things to do in El Paso, head to Guadalupe Mountains National Park for truly majestic landscapes (and depending on time, consider dipping across the border to visit Carlsbad Caverns National Park in New Mexico as well).

From there, head off to Big Bend National Park: don’t miss hiking Santa Elena Canyon or admiring the views from Marshall Drive!

Along the way, consider stopping at the ghost town of Terlingua, the artsy town of Marfa (famous for its Prada store that never opens), and the McDonald Observatory, to fully appreciate the inky black night sky of West Texas.

In order to fully appreciate both national parks as well as Big Bend Ranch State Park while still leaving time for additional sightseeing along the way, we recommend taking around a week and a half to enjoy a West Texas road trip.

For a Texas road trip with a fantastic mix of big cities, great food, charming small towns, and even a bit of nature, consider taking a road trip beginning and ending in Dallas.

Start off your trip by enjoying the best of Dallas and Ft. Worth, including the Arboretum, Reunion Tower, and Sixth Floor Museum in Dallas, and the Stockyards in Ft. Worth.

From there, head down to Waco, where you’ll find the insanely popular Magnolia Market at the Silos, the beautiful campus of Baylor, Wooly Mammoth National Monument, and even a Dr. Pepper Museum (Texans are serious about Dr. Pepper).

Be sure to stop along the way for kolaches in West, Texas!

Depending on the time of year and amount of time you have for your road trip, other destinations to mix in include Dublin (the original home of Dr. Pepper and a town with lots of Irish influences), Grapevine (one of the best Christmas destinations in Texas), Ennis (home to some of the best bluebonnet fields in the state during the spring) and Canton (adorable and historic, plus home to one of the best flea markets in Texas).

A quick 3-day weekend is long enough to hit a few major sights in both Dallas and Ft. Worth and briefly see Waco as well, but for the full experience covering the great small towns near Dallas, 5-7 days would be a better time frame to work with.

If you’re looking for a beach escape in Texas, you can’t do better than road tripping the southern section of the Gulf Coast.

Starting in Corpus Christi, head down the coast to charming Mustang Island before making your way down to South Padre to enjoy one of Texas’ most beloved beach escapes.

From riding horses on the beach to visiting a sea turtle sanctuary to, of course, simply enjoying the sun and waves, you’ll find plenty to do along the way.

Be sure to stop in Port Isabel to see Texas’ second-smallest state park and climb the 19th-century lighthouse for beautiful views of the town and water, too!

This road trip can be enjoyed over a 3-day weekend, though you’ll probably want to choose between visiting either South Padre or Mustang Island if you’re short on time.

To visit both islands and stop at fun spots like Port Isabel along the way, a week is a good time frame for this road trip in Texas.

Nothing puts the diversity of Texas on display quite as obviously as starting in the enormous metropolitan area of Houston and then driving due north, where very quickly, city will give way to green forest–a far cry from the desert landscapes of West Texas or the endless fields of the Panhandle that Texas is more likely to be associated with.

East Texas, though, is a whole different ball game, from the barbecue (generally served on a bun with sauce, unlike its better-known cousin from Central Texas) to the landscape.

For your Piney Woods road trip, stop by Davy Crockett National Forest to get an idea for what the nature in East Texas has to offer before heading onto towns like Palestine (one of the homes of the Texas State Railroad), Longview, Jefferson, Marshall, and Nacogdoches.

Caddo Lake State Park, with its beautiful bayous and Spanish moss, is also a must-see stop on an East Texas road trip.

Don’t forget to leave a little time for Houston itself: the Houston Space Center alone is worth the trip!

Starting and ending in Houston, you can get a good overview of the Piney Woods area in around a week–but consider extending your Texas road trip a bit to dip down south of Houston to enjoy the beaches of the Gulf Coast a bit, too!

As the second-largest state in the USA, Texas covers a positively enormous amount of land–much of it extremely empty land, especially the further west you go–and therefore taking a road trip in Texas means planning strategically based on where in the state you are.

… and definitely don’t try to cover the whole state in one trip.

Unless you have the time and inclination to drive for thousands of miles, looping around the entirety of Texas’ most famous attractions is not realistic on a single Texas road trip.

The good news is, though, that that means there’s always a reason to come back!

Stopping and Buc-ee’s and Rudy’s are important parts of any road trip in Texas.

Buc-ee’s has a bigger reputation, but Rudy’s has better breakfast tacos–in my opinion, anyway, but there are definitely those who vehemently disagree!

Either way, these iconic Texas institutions deserve to be part of any Texas road trip.

Rudy’s is a chain of barbecue restaurants with a side of selling gas and running a small general store, and Buc-ee’s is a gigantic gas station/souvenir shop/bakery/snack station with obsessively clean bathrooms and a beaver statue out front–and with a description like that, how can you not want to see it in person?

Texans drive fast, so be prepared!

The highest posted speed limit anywhere in Texas is 85 mph (70, 75, and 80 are more common, though), but on the long stretches of the open road, let’s just say that the speed limit can often, in practice, turn into the speed minimum.

Fill up when you can, especially when headed to rural areas.

Texas isn’t exactly Australian-Outback-levels of deprived of gas stations, but especially if you’re driving through very rural areas and/or on back roads, you won’t want to stress over your gas tank getting too low.

If you’re not in a hurry, opt for the back roads once in a while.

READ NEXT
15 Epic Hikes in Texas (+ Map to Find the Trails!)

Texas’ cities are incredible, but many of the charms of road trips in Texas lie far away from their skyscrapers and (notorious) traffic.

Small towns, state parks, and wide-open spaces are some of the best things you can see in the Lone Star State, so be sure to mix them into your Texas road trip itinerary!