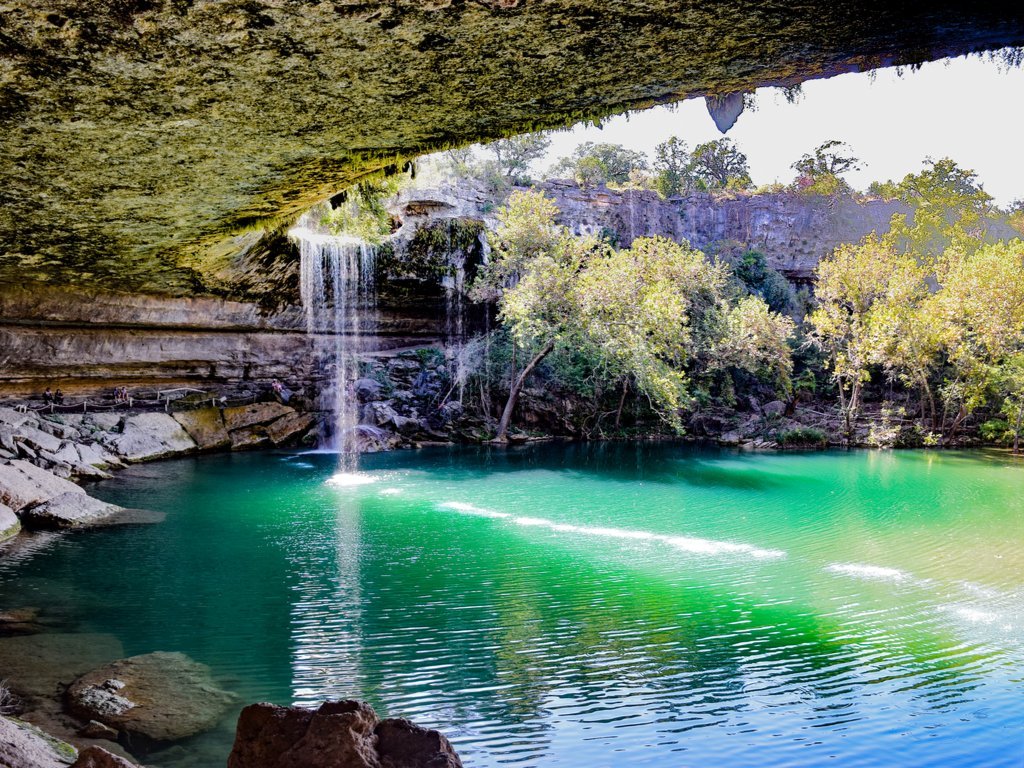 While the cities are popular and natural areas stunning, there’s no way to fully appreciate the beauty and diversity of the Lone Star State without checking out some of the best small towns in Texas.

From the vineyards and natural beauty of the Hill Country to quirky spots like Marfa, Texas’ small towns are like nowhere else.

Undoubtedly one of the best-known small towns in Texas, popular Fredericksburg is known for two things: its German heritage and its many, many vineyards.

While you’re there, consider making the short drive to Enchanted Rock, too–after all, you’ll no doubt want to stretch your legs after feasting on Texas wine and German food!

Home to the famous Hamilton Pool Preserve, plenty of wineries and distilleries, and some of Texas’ loveliest Hill Country wedding venues, Dripping Springs is a delightfully charming town–and it makes an excellent day trip from Austin!

Most Texans are incredibly familiar with Shiner, even if they’ve never considered visiting this small Texas town with a population of merely 2,000 people: this is the home of Shiner Beer, a staple of all Texas grocery stores!

This claim to fame means that, by far, the most popular thing to do in Shiner is touring the home of Shiner Beer, Spoetzl Brewery–but it’s worth staying long enough to check out the cute downtown after you wrap up your time at the brewery!

As the hometown of President Lyndon B. Johnson, today this tiny town is best known for the LBJ Ranch, which is now a museum open to the public.

Home to just 13 official residents, the positively minuscule town of Luckenbach is the tiniest of all the best small towns in Texas!

Despite its small size, Luckenbach is well-known as a country music hotspot, and is home to a popular dance hall and far more live shows than one would expect from a town of merely 13 people!

Tucked into a quiet corner of west Texas, Marfa has gained notoriety in recent years for how utterly unexpected it is!

Home to smallest Prada store in the world (though it is never open–it’s actually an art installation), several works by Andy Warhol, and several other quirky works of art, Marfa is incredibly entertaining to visit and one of the most unique small towns in Texas.

With a name like Dublin, is it any surprise that Dublin, Texas is extremely proud of its Irish heritage?

This small Texas town is home to plenty of nods to Ireland, but surprisingly–despite the enormous St. Patrick’s Day celebration and its numerous Irish-themed businesses–this heritage is not what the town is best known for!

Instead, Dublin is best known as the home of to Dublin Bottling Works, the original bottlers of Dr. Pepper (sadly they don’t bottle the drink anymore) and the Dr. Pepper museum!

There are plenty of reasons that Ennis could qualify as one of the best small towns in Texas, including its cute historic district, great Czech food, and annual Polka festival… but the absolute best reason to check out Ennis comes around each April: bluebonnet season.

Home to 40 miles of what is called the Official Bluebonnet Trail of Texas, there is no better place to admire Texas’ iconic–and absolutely stunning–wildflowers each spring.

Though West is home to a cute-if-small downtown, it is primarily known for its Czech heritage and–more specifically–its kolaches.

Though the kolaches you find in West have certainly been Texas-ifed (I would never find my favorite combo, a sausage, cheese, and jalapeno klobasnek, for sale across the pond in the Czech Republic!), they are incredibly delicious–and they alone would be enough to rank West as one of the best small towns in Texas.

Known as the “barbeque capital of Texas”, you’ll definitely want to be sure to arrive in Lockhart with an empty stomach and a big appetite!

Smitty’s, Kreuz, and Black’s are among the most legendary barbeque spots in the area, but Lockhart is also home to plenty of breweries and a big helping of small-town Texas charm.

The adorable small town of Boerne is located just outside of San Antonio, but it feels worlds apart from the hustle and bustle of the city.

With a strong German heritage, a beautiful downtown packed with restaurants and antique shops, and plenty of year-round festivals to hit up, Boerne is a fun and simple way to enjoy a classic small Texas town without traveling far.

For much of the first half of the 20th century, Terlingua was a booming mining town–but today, it is the only ghost town on this list of the best small towns in Texas.

After the Chisos Mining Company went bankrupt in 1942, this small settlement between Big Bend National Park and Big Bend State Park ended up abandoned–but the remains of the town have become a tourist attraction, and are incredibly interesting to visit.

Located right on Lake Granbury, the quaint town of Granbury has been named the best historic small town in the country by USA Today, and a quick stroll through its historic center makes it clear why!

Granbury is beautiful, charming, and packed with a wide variety of things to do for a town so small, from getting out on the lake to touring the Hood County Jail Museum.

Located right where the Blanco River meets Cypress Creek in the Texas Hill Country, Wimberley is one of the best small towns in Texas for those looking for a swim.

The nearby Blue Hole and Jacob’s Well both draw in plenty of visitors hoping to beat the Texas heat, but if you visit, be sure to also for exploring Wimberley’s wonderful art and music scenes!

Located on the banks of Lake Marble Falls (which aren’t set on marble at all, but that classic Texas staple of limestone), Marble Falls is a charming Hill Country town perfect for both outdoor enthusiasts and those hoping to hit up the small-but-lovely downtown.

Be sure not to leave town without trying a slice of pie from the Bluebonnet Cafe, which serves up some of the best pie in Texas!

Home to the second-smallest Texas State Park and the only lighthouse on the Texas coast the is open to the public, Port Isabel is a charming, small port town and a fun addition to a trip to the Gulf Coast!

The miniscule town of Driftwood, Texas may be barely a dot on the map–it’s home to less than 200 people–but most Texans have heard of it for one reason: it’s the home to the legendary Salt Lick BBQ, one of the best barbeque joints in Texas!

Driftwood is also located just down the road from popular Dripping Springs, so with a little planning, you could even hit up famous Hamilton Pool and Salt Lick BBQ in a single day.

The self-proclaimed Cowboy Capital of the World can be found just an hour outside of San Antonio, and is definitely worth checking out when exploring the best small towns in Texas!

If you’re looking for a great place to take a horseback ride or spent a weekend at a dude ranch, Bandera is the Texas town for you.

Unlike the rest of these small towns in Texas, Gruene isn’t technically a town at all, but rather a historic district in New Braunfels–but that wasn’t always the case.

Once upon a time, Gruene was an independent town known for its cotton production, but today, it is best known for Gruene Hall, a classic Texas dance hall that dates back to the 19th century and is the oldest continually operating dance hall in the Lone Star State!

While Canyon itself does have its charms, including a cute downtown center and its status as the home of West Texas A&M, the best reason to visit this small Texas town actually lies 12 miles outside its border.

Here, you’ll find Palo Duro Canyon, the second-largest canyon in the USA and one of the coolest state parks in Texas!

As the largest town (relatively speaking–the population is just over 4,000 people) on Mustang Island, Port Aransas is known for nearby excellent fishing, and plenty of long, beautiful beaches on the Gulf of Mexico.

If you’re looking for a laid-back weekend at the beach, add Port Aransas to your list of small towns in Texas to visit!

Map of the Best Small Towns in Texas

Any cookies that may not be particularly necessary for the website to function and is used specifically to collect user personal data via analytics, ads, other embedded contents are termed as non-necessary cookies. It is mandatory to procure user consent prior to running these cookies on your website.